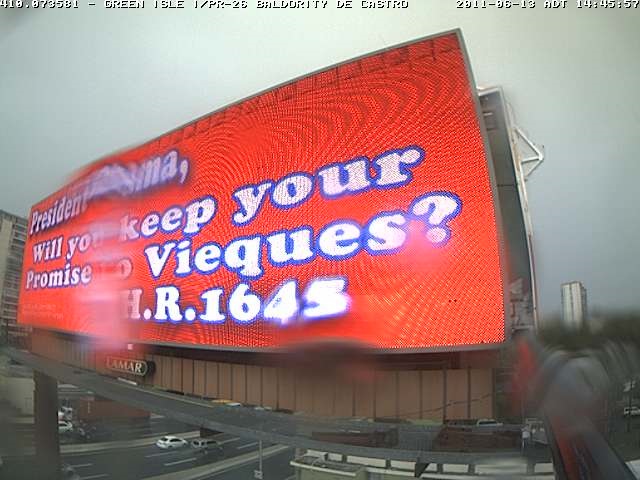 Members of the Committee for the Rescue and Development of Vieques (CRDV) and the Vieques Women’s Alliance will participate in protest actions on occasion of President Obama’s visit to Puerto Rico on June 14.  The group will display a banner with the message:  President Obama – Keep Your Promise to Vieques:  Health Services, Environmental Clean up, Community Development.  In addition, electronic billboards on highways close to the International Airport will show similar messages during the day of Obama’s visit.

Spokespersons for the Vieques groups assert that Obama has not kept campaign promises made by the President to the community and to then Governor, Anibal Acevedo Vilá, about taking strong measures to deal with the health crisis and lack of medical services on the island municipality and help with economic development that was strangled here as a result of half century of US control and decades of destructive military practices.

Just last week, the Federal First Circuit Court of Appeals in Boston, heard oral arguments from lawyers for seven thousand Viequenses suing the US Navy for health damages.  The Viequenses suggest President Obama has the power to order a settlement of this case and do justice for the people of Vieques, action he has thus far refused to take.  Another option for Obama to alleviate the suffering on Vieques is to support legislation like that being prepared by  Congressman Steve Rothman (D-NJ) that would provide Vieques with adequate medical facilities, a research center to better understand the relationship between military toxics and health.  Such legislation should also include, according to the Viequenses, monetary compensation to the Municipal Government and to people sick and contaminated with Cadmium, Mercury, Uranium and/or any of the other heavy metals detected in exaggeratedly high numbers of Vieques residents tested.
Armando Torres, CRDV board member whose wife died of cancer several years ago, will be holding the banner to demand the President of the United States take responsibility for the death and destruction caused by US military forces on this small Puerto Rican island.

The Viequenses also add their voice to the demand for release of Puerto Rican Political Prisoner (PRPP), Oscar López Rivera. They maintain that Oscar and all the PRPPs have the struggle for peace and justice on Vieques in their hearts.  “During thirty years jailed and tortured in US federal prisons, Oscar López Rivera has expressed constant solidarity and worked for the Viequense cause.  We demand President Obama end this terrible manifestation of colonialism and free Oscar immediately,” stated Robert Rabin of the CRDV.

On September 20, the winds of consciousness, commitment, courage, and change blew through Cleveland's Roberto Clemente Park in a...
Puerto Rico Rebuilds!

PRCC Board President publishs “Puerto Rican Women Nationalists vs. U.S. Colonialism: An Exploration of Their Conditions and Struggles in Jail and in Court”...