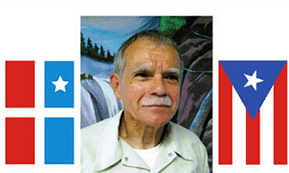 To Confer the Betances Medal on Calle 13

Three Generations of the Struggle for Puerto Ricanness

On December 22, the Puerto Rican Atheneum will dedicate its solemn act of raising the Puerto Rican flag to Puerto Rican political prisoner Oscar López Rivera. The activity will take place, as it does every year, at noon in front of the historical headquarters in Old San Juan.

The family, including his brother José López, Democratic congressman from Illinois Luis V. Gutiérrez, and René Pérez, member of the renowned group Calle 13, are expected to attend the activity honoring the flag and López Rivera. A statue of the illustrious Ramón Emeterio Betances will be unveiled.

Claridad will livestream the activity at www.claridadpuertorico.com.

The occasion represents an appeal to the attention and conscience of all Puerto Ricans to renew their patriotic commitment to struggle for the freedom of this Puerto Rican brother who this year marked the 30th anniversary of his cruel and unjust imprisonment.
The dedication of the activity also takes place almost a year after the awful January 5, 2011 denial of López Rivera’s parole by the Parole Commission of the United States Department of Justice. As denounced at the time of the proceedings conducted by Mark Tanner [sic], it was arbitrary and contaminated.

Additionally, activists will also be hiring a plane to fly over the Ateneo for 2 hours with a 7-ft tall banner proclaiming (in Spanish): “Oscar López Rivera: Freedom Now” followed by a giant Puerto Rican flag (image below).For emore information on the event contact Edwin Cortés at: libertad44@choicecable.net