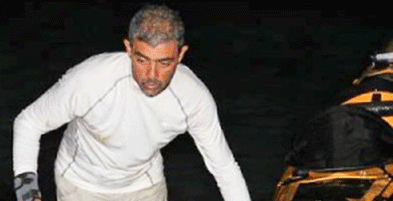 For the Freedom of Puerto Rican Patriot Oscar Lopez Rivera 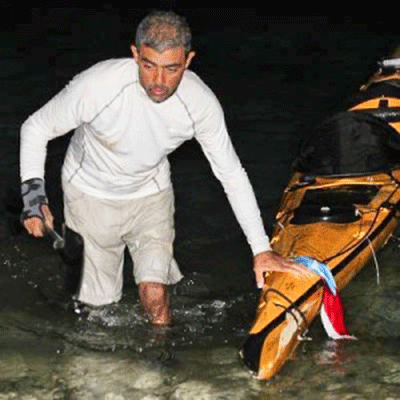 July 31st, 2012 – For a second day, Alberto De Jesus (Tito Kayak) remains on the small Caribbean island of St Martin, awaiting for a change in the weather and the arrival of an escort ship in order to continue rowing to Puerto Rico. The international quest in support of the effort to bring about the release of U.S.-Held Political Prisoner, Puerto Rican patriot Oscar Lopez-Rivera, began on June 21st from the Paria peninsula in Venezuela where Tito began rowing, following the path of the ancestral Arawak people who first populated the Caribbean archipelago centuries ago.
Lopez-Rivera has served 31 years in th U.S. prison system, convicted of “seditious conspiracy”, for fighting for the liberation of his homeland. A native of the mountain town of San Sebastian, Puerto Rico, Oscar Lopez Rivera, a Vietnam veteran who was decorated by the U.S. military for his wartime service, became an activist on behalf of Puerto Rican rights in the U.S. and for the independence of Puerto Rico upon his return from South East Asia in the streets of Chicago. Arrested in 1981 following 5 years in clandestinity, Oscar is today the Puerto Rican who has served the longest prison sentence in the struggle for his country’s independence since the US invasion 114 years ago. Two other Puerto Rican freedom fighters, the brothers Avelino and Norberto Gonzalez-Claudio, are also in U.S. prisons.

Tito Kayak, an internationally known grassroots environmentalist, human rights activist and daredevil, now awaits the passing of rough weather in order for the 38-foot sailboat Breeze, carrying the support, logistics and security support committee coordinator Elisa Sanchez, and sociologist and cultural researcher Pluma Barbara, to depart to the colonially divided (French in the north and Dutch in the south) island of St Martin. The Breeze is presently on the coast of the island of Tortola, waiting to sail on to St martin when the weather permits. The vessel will begin escort duties for the remaining 1/3 of this international grassroots effort for the release of Lopez-Rivera from there, in a northern and then western direction through the Anegada passage, one of the most dangerous parts of this kayaking journey due to the strong cross currents where the Caribbean sea and the Atlantic ocean meet. Furthermore, local fishermen have warned the support team that they have noticed unusually aggressive shark activity on the way to Anegada.

Tito Kayak will then row first to the British and then U.S. Virgin islands and then on to the Puerto Rican island municipalities of Culebra and Vieques, where a welcoming committee awaits his arrival. He is expected to arrive in his kayak at the beach encampment of Amigos Del Mar in isla Verde, Carolina, at some point next week, weather permitting.