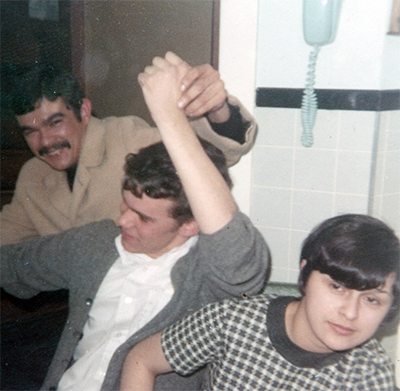 10th letter by Oscar López Rivera: “The Hands on the Glass: the Dance of Memory”

Dear Karina, Recently I was remembering that the great musician Andy Montañez has a painting that I did some time ago with the two of you in it, you with him. I admire you both for different reasons. You, because you study earnestly and take pride in where you come from.

Andy, for obvious reasons — because he is a musical institution of my country and because he has always been faithful to his principles, an artist who maintains his courage above all else.

Do you know why I have never wanted people to refer to my “liberation”? Because I am free, Karina. And music has contributed greatly to this freedom. I prefer that people say the “release” of Oscar. Freedom is something I have never lost.

My tastes in music have always been eclectic; I like many genres. But Puerto Rican music moves me more than any other form.

I began to dance salsa many years ago, before it was called salsa. The first time that Cortijo and his ensemble went to Chicago, a cousin of mine asked that we go to see them. And, of course, we went, but at that time, I did not know how to dance. But, being a good Boricua, I dared to ask a girl to dance with me, who in the end was disappointed by my scant aptitude. After that embarrassment, I dedicated myself to learning how to dance by myself. The truth is that during that period, when I decided to go to another dance, I was not exactly the dancer of a woman’s dreams.

Later I began to frequent different parts of the city where the Puerto Rican youth celebrated the parties that in Puerto Rico would be called “marquee events,” but for us were parties “for the apartment.”

As some places with latin music were opening, I went to them and I believe I danced a little better each time. One night, I met a Puerto Rican woman who loved to dance. The first time, while we danced, she asked me if I could give her a ride home. I told her that i would be delighted to, but as soon as we entered the car, she warned me not to expect anything more than a good friendship.

Things remained clear and she added that that friendship would be beneficial for me. Indeed, it was. She was some four inches taller than I was and seven years older. She started to take me places where everyone knew her as an excellent dancer. One Sunday afternoon, in one of those clubs, a middle-aged Puerto Rican man kept looking at us and soon commented that she was too much for me, both as a woman and as a dance partner. I was worried — I was a boy and thought that that man was inviting me to fight. But she stood in the middle of everyone, put her hands on her hips, and in a loudly told him that I was probably more of a man and a better dancer than he was. That ended that incident.

I remember that woman whenever I hear music, and I lament having disappointed so many girls by dancing as poorly as I did, and having inflicted so many bad nights on the neighbors when we organized dances during the weekends and made noise all night long.

I danced with the music of El Gran Combo, of Tito Puente, of Tito Rodríguez, of Eddie and Charlie Palmieri, of Joe Cuba, Tommy Olivencia, Pete “El Conde” Rodríguez, Ray Barreto and less-well known salsa orchestras that were emerging in Chicago.

I no longer had time to dance when I started doing community work and joined the political struggle. But I still hum the songs of my youth and think that dancing also gives us a kind of freedom, which is the freedom of memory.

In resistance and struggle, your grandfather,