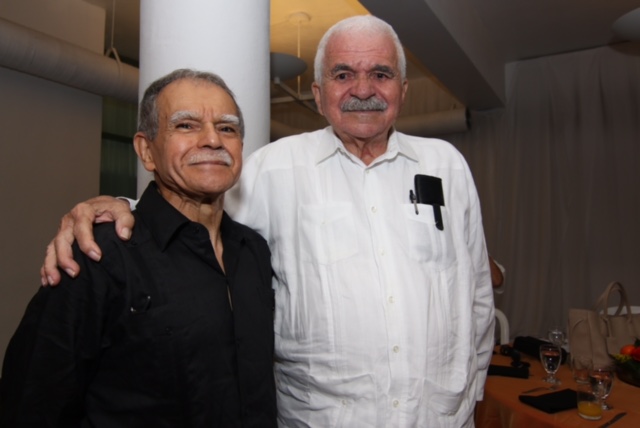 It was in Mayagüez, during the celebration of his 87th birthday, when I heard him speaking about the Ponce Massacre that occurred on the 12th of March 1937. He mentioned how his mother’s dress was full of blood, how he heard gunshots and how his mother and father had protected him. But not once did he say that he had been scared, in spite of all the commotion and the different noises he had to have heard. While listening to him, I began to realize how early in life he had started to accumulate courage.

How much courage he had started to accumulate at such an early age I was able to continue discovering was when he started talking about the moment he refused to pledge his allegiance to the flag of the imperialist ogre from the North. He was only 7 years old when he told his teacher that he wasn’t going to salute or pledge allegiance to the flag of the U.S.A. When he was talking about that experience, I started to realize that at a very early age he had started to walk on the revolutionary path that Don Pedro Albizu Campus had created.

As the conversation progressed, he started talking about his refusal to be drafted for military service and used as cannon fodder by the same colonizer and oppressor of Puerto Rico. He was only 19 years old, but the U.S. government decided to send him to Tallahassee federal prison, Florida. He repeated the story of a guard who disrespected him, and he punched him. For that he was sent to the hole, where conditions were terrible, and the food served was worse. But a Puerto Rican prisoner was able to send him a message letting him know that he was going to receive a good meal disguised as the regular junk the prisoners in the hold were receiving. For the duration of the time he was in the hole that was the good and tasty food he was receiving. Once his sentence was completed, he left behind a group of Puerto Rican prisoners who were his good friends.

The last part of the conversation was about the attack on the Congress of the U.S. At age 23 he united with the team that was going to attack the Congress. This team was made up of Lolita Lebrón, who was the leader, Andrés Figueroa Cordero, Irving Flores Rodríguez and himself. On the 1st of March, 1954 the four entered the Congress, fired their weapons and the whole world was made aware that Puerto Rico was still under the yoke of U.S. colonialism. Lolita let the world know that “She had gone to Washington not to kill anyone but to give her life for Puerto Rico.”

It was while listening to tapes of the Five Nationalists, who were facing long sentences in U.S. prisons that I became aware of their plight. I was profoundly moved when I heard Lolita say, “I came to Washington not to kill anyone but to give my life for Puerto Rico.” From that moment on, I started to work in the campaign of the Five. I had just come home from the Vietnam War after having spent one year and three days there and had been impacted by the words of Dr. Martin Luther King, Jr., who had declared that the war against Vietnam was criminal.

We started becoming more aware of the plight of the 5 because of attorney Michael Deutsch, who, while visiting an African American prisoner in U.S.P. Marion, was told there was a Puerto Rican political prisoner in the penitentiary that he should meet. Michael met Rafael and from that moment on, we found out more and more information about Rafael and the plight of the 5. And on the 10th of September 1979, Oscar Collazo López, Irvin Flores, Lolita Lebrón, and Rafael were given their unconditional release from prison. It was a glorious day. Little did I know then that I would be sent to the U.S.P. Leavenworth after my arrest in 1981 first, and five years later to U.S.P. Marion – two prisons where Rafael had been incarcerated. What astonished me the most was discovering how much love and respect the prisoners had for Rafael in those two penitentiaries.

Rafael has, and will always be my mentor and best example of what it means to love and fight for the freedom and sovereignty of our homeland. He was the oak and the Albizuista who embodied what is courage, sacrifice and love. Rafael, you will always be present in my heart, mind and actions. I hope that all Boricuas who want to see and live in a free and sovereign Puerto Rico emulate his example.