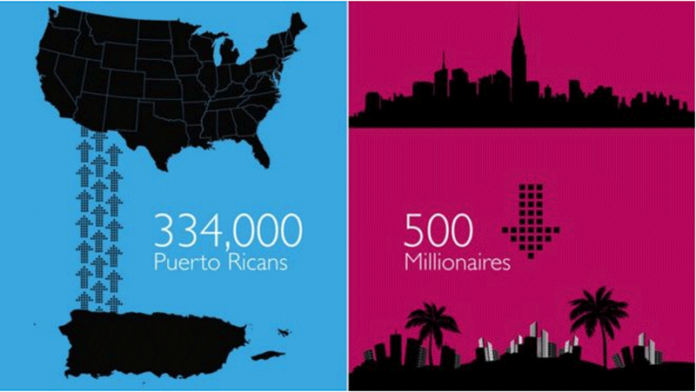 Puerto Rico’s struggling economy has led to an exodus of young people moving to the US mainland – while wealthy Americans are starting to call San Juan home. As a result, the economy and identity of both places are changing in surprising ways.

While the US economy is steadily improving, Puerto Rico’s unemployment rate has remained at over 13%, twice the US national average, for the last decade. The island is facing a fiscal crisis with $72bn (£47.5bn) in debt.

So the government is looking elsewhere for relief. It has started to lure America’s super wealthy from the US East Coast. Two acts passed in 2012 guarantee no capital gains taxes and a mere 4% tax rate on their business to those who make Puerto Rico their primary residence. 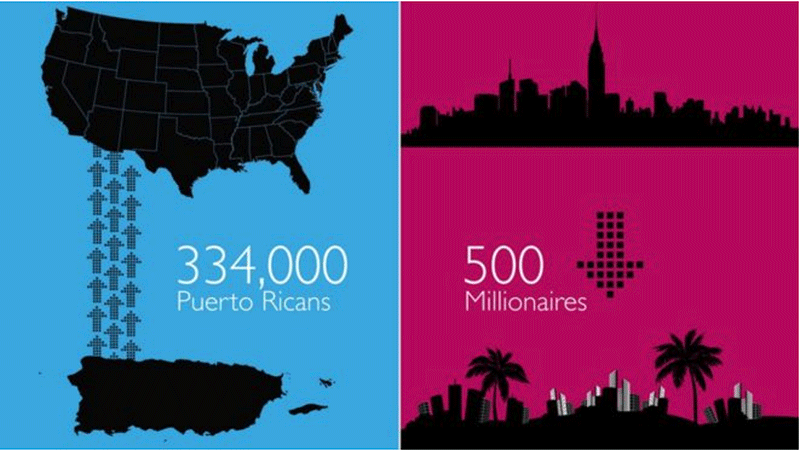 More than 500 eligible individuals have answered the call.

“There has been some concern that we’re not contributing enough on the island and not everybody is happy about that,” says Robb Rill, who moved his business down in 2013.

He says the island is benefitting.

“There’s probably been almost a billion dollars invested on the island since these acts have passed, and that’s a billion dollars that would not have been invested on the island had there not been the proper incentives. So the everyman on the street doesn’t necessarily see the direct benefit, but I can tell you that there is an immeasurable benefit not just on the real estate but through direct investment which is making a difference.”

What do they get?

This influx of mainland monied comes as tens of thousands of Puerto Ricans leave every year. They head in search of more opportunity on the US mainland, where they have the right to work as US citizens.

“You have a population in Puerto Rico where the productive sector is shrinking and the young professionals are leaving. Then you have an elderly population that’s increasing in size, and obviously that population is going to depend more and more on government.”

Funding those government services is a contentious issue.

“I am the worker, I am the one who is paying the taxes,” says Orlando Rivera, a store manager in the city of Ponce. “I have to sustain my family, pay a 400-dollar electrical bill and my daughters’ tuition fees. And in the meantime [the millionaires] aren’t bringing any solutions to the problem.”

For those who aren’t wealthy, staying in Puerto Rico is not always an option.

“Young people here that go to university and prepare themselves, they really want to stay on the island and it’s not something they can do.” says Ms Rodriguez.

The changing demographics are altering Puerto Rico’s relationship with the mainland.

“Students that have decided to leave the island for job opportunities are important for Puerto Rico because they create other opportunities,” says Uroyoan Walker, the President of the University of Puerto Rico. “It’s very important that the university and the people of Puerto Rico stay connected with that diaspora so that we can become a stronger and bigger country.”

This increased migration has presented an opportunity for entrepreneurs.

Titan Products of Puerto Rico opened a distribution centre in Central Florida last spring. Over 40,000 square feet of Puerto Rican products are being moved here and shipped across the Southern US.

“People used to travel there and bring back in their luggage, the cookies, the beans, or the rice,” says Rafael Julia, the sales director for Titan. Alternatively, they would get products sent through the post or brought back by friends or family, she adds.

“We receive probably one to two containers a week, they come from Puerto Rico, we consolidate all the cargo down there. We have over 176 clients from small bodegas, family-owned, to big supermarkets.”

They say their business is booming.

“We can double our sales next year. We are currently talking to big players like Publix and Wal-Mart to have our products there.”

And where there’s people and money the politicians won’t be too far behind. Puerto Ricans residing on the mainland have the same voting rights and could be the kingmakers in one of the most important Presidential swing states in 2016.

“I don’t think any presidential candidate who is looking to secure Florida will be able to do that without counting on the support of the Puerto Rican communities,” says Jose Luis Marantes a political activist with Mi Familia in Orlando.

“It’s not enough just to be able to say a couple of words in Spanish to be able to say that you’re in solidarity with the Latino community and with the Puerto Rican community. You need to speak about jobs, about health care, about education, and about opportunities for folks to come in.”

The Puerto Rican Nation on the Move: Identities on the Island and in the United States (Summary)