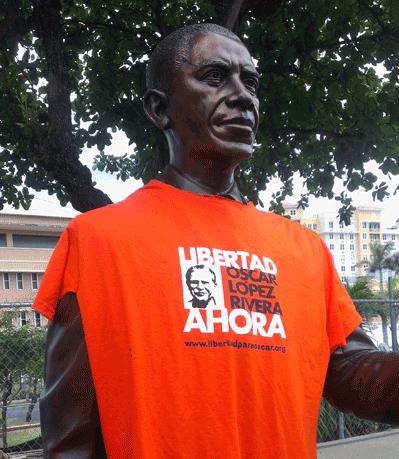 Activists covered statues of nine US presidents with orange t-shirts- the color of US prison uniforms, in front of the Capitol- with the message “Freedom for Oscar López Rivera NOW“, the protesters, in the majority university students, summed up the demand of various political, social and religious sectors for the parole of López Rivera who has been in US jails for 30 years.

Raquel Delgado Valentín, one of the members of the group, said that the political prisoner will complete 31 years in prison today. “In Puerto Rico, though we may differ, we recognize people like Pedro Albizu Campos, Lolita Lebrón and Rafael Cancel Miranda for their love of country. In the same way we recognize figures like Martin Luther King and Mahatma Gandhi who were prisoners for the struggle for more rights for society. It’s for that that we must look from another perspective at the case of Oscar López Rivera,” said Aníbal López Correa, another member of the group.

He added, “Though when there are differences in ideological vision, Oscar’s case transcends them and it obliges us as a people to demand justice and his immediate freedom. It’s time to bring Oscar home.”

A press conference was also convoked at the Puerto Rican Bar Association, with representation form every sector of Puerto Rican society. (See above)

In addition, a light plane carrying a huge banner proclaiming “freedom for Oscar López Rivera” flew over the Capitol, the University of Puerto Rico-Rio Piedras Campus, the Puerto Rican Bar Association and other institutions.

Teams of activists including the Human Rights Committee also hung large banners from overpasses and stood by the side of roads holding banners in Lares, Mayaguez and San Juan, among other cities.

A mural was also painted in support of Oscar’s struggle for freedom in his hometown of San Sebastian, Puerto Rico.

August 22, 2020
Previous articleNBHRN Commemorates El Grito de Lares in the Diaspora dedicated to Oscar López Rivera
Next articlePres. Obama: You Can Free Him with the Stroke of a Pen