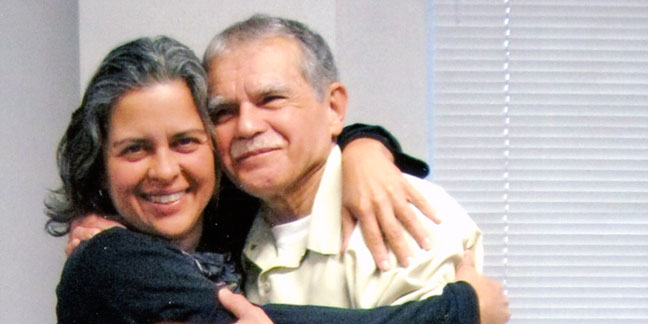 [Today, NBHRN and its supporters received the disappointing news that the examiner did not recommend parole for Oscar López Rivera. We will update you on the next steps in the campaign. The fight isn’t over yet. The Parole Commission still has to make a decision whether to follow the recommendation.—Miguel Morales]

A hearing examiner said Wednesday he doesn’t believe a Puerto Rican nationalist who once turned down a clemency offer from President Clinton should be paroled after nearly 30 years in prison, the inmate’s lawyer said.

Jan Susler, the lawyer for Oscar Lopez Rivera, said she will ask the U.S. Parole Commission to overrule the examiner’s recommendation, which came after a closed hearing at a federal prison in Terre Haute, Indiana.

“We are extremely disappointed,” Susler said in a phone interview after the hearing. “There was no justice today.”

Parole Commission officials are prohibited under the organization’s rules from discussing the case, even to confirm the examiner’s recommendation, said Johanna Markind, an assistant general counsel. They only release the final decision.

Susler said that Tanner declared that Lopez’s crimes were too serious to allow release on parole and that he should remain behind bars until at least 2023.

Lopez is serving a 55-year sentence for his conviction on seditious conspiracy, armed robbery and other crimes committed during a violent struggle for Puerto Rican independence.

He belonged to the ultranationalist Armed Forces of National Liberation, which claimed responsibility for more than 100 bombings at public and commercial buildings during the 1970s and ’80s in such U.S. cities as New York, Chicago and Washington, as well as in Puerto Rico.

Few of the attacks caused injuries, but a bombing at New York’s landmark Fraunces Tavern in 1975 killed four people and injured more than 60 in a lunchtime crowd.

A survivor of the tavern bombing and three relatives of victims testified at Wednesday’s hearing at the prison, according to Susler, who opposed the testimony because Lopez wasn’t convicted of any direct role in the attack.

“I feel their loss, I regret their loss. They’ve lived something that’s terrible, but they have nothing to offer in the case we are here to talk about today,” Susler said. “Oscar Lopez was never accused of anything related to Fraunces Tavern.”

Clinton offered in 1999 to release Lopez and 13 other Puerto Rican nationalists as part of what was at the time a politically sensitive clemency deal. Lopez turned it down because two other comrades were not included in the offer and he vowed to serve out the remainder of his term. In the end, 12 nationalists were released under the deal and the two that Lopez wanted freed at the time have since been released.

Now the 67-year-old Lopez wants his freedom as well. His brother Jose said he made the parole application, his first, largely so he can spend time with his daughter and granddaughter and other family.

“We had a very long and personal discussion in my family,” Jose Lopez, executive director of the Puerto Rican Cultural Center in Chicago, said in a telephone interview. “We really wanted him to come home.”

Four members of Congress of Puerto Rican descent sent a letter to the Parole Commission calling for Lopez, a Vietnam veteran who received a Bronze Star for valor, to be freed on parole. They noted Clinton’s clemency offer in 1999 and said they do not believe Lopez poses a risk.

“Notably, of all the Puerto Ricans convicted for politically motivated activities in the early 1980s, Mr. Lopez-Rivera is the only one who remains in prison,” said the letter, which was signed by Reps. Jose Serrano and Nydia Velazquez of New York, Luis Gutierrez of Illinois and Pedro Pierluisi, Puerto Rico’s nonvoting House delegate.