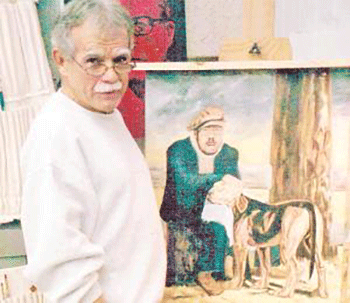 Although he is convinced that Obama will make a decision before leaving the White House, he doesn’t want to sow “false hopes”

By José A. Delgado / jose.delgado@gfrmedia.com

WASHINGTON – Days before completing service of 404 months in prison, and with intensifying pressure for his release, Puerto Rican political prisoner Oscar López Rivera is convinced that president Barack Obama will make a decision before leaving the White House, but he doesn’t want to sow “false hopes.”

He just spent his 33rd Christmas in prison, days during which calls for his release intensified in the international arena, generating very high expectations among those who, as his attorney Jan Susler says, can “cross their fingers, but not their arms,” to win his return home.

His 72nd birthday coincided with Three Kings Day, and although the spirit of Christmas didn’t penetrate the prison in Terre Haute (Indiana), on January 6th López Rivera became the chef of the day, cooking for Puerto Rican and two Colombian prisoners the best lunch – given the quality of food at the institution – they could purchase at the commissary: seafood, rice and Mexican beans. And for dessert, a little cake.

His memories of celebrating his birthday before prison are fuzzy. “Since I joined the struggle, I don’t celebrate it,” he said.

In May, López Rivera will mark 34 years in U.S. prisons, after being arrested and convicted for “sedition,” due to his connection with the Armed Forces of National Liberation (FALN). He is aware of the most recent calls for his release from the presidents of Uruguay, José “Pepe” Mujica and Venezuela, Nicolás Maduro.

They also went to look for him in the room where he paints, to tell him that on television the presidents of the United States and Cuba were announcing the historic decision to reestablish diplomatic relations. The negotiations about Cuba, which included an exchange of spies and the release of political prisoners in Havana, were peppered with steps, like those of president Mujica, to finally accomplish the release of the longest held political prisoner in U.S. prisons.

“I don’t think there will be a decision in the very near future,” said López Rivera, in an interview on Thursday, which took place by telephone, for the fourth time in 19 months, Terre Haute authorities – alleging security reasons – refused to permit El Nuevo Día access to the prison.

How is your health?

Your image is everywhere in San Juan. There was an intense Internet campaign on your birthday, which reached more than 550,000 social network accounts. In Río Piedras there was an activity to celebrate your birthday.

– I read the letter. That man is one of my heroes. His vision of the world should be carefully studied.

– I think president Maduro was responding to what vice-president Joseph Biden said about their torturing Leopoldo López. Nicolás Maduro, like Hugo Chávez, was democratically elected. If the people who tried to overthrow Chávez had been in the United States, they would very likely not only be in prison, but maybe they would have been tortured. In Puerto Rico they haven’t given us the opportunity to decolonize.

Do you see Maduro’s proposal as a real possibility?

– I don’t think the U.S. is going to do that. For the U.S., Leopoldo López represents more in prison in Venezuela than in the United States.

Would you accept it if you could return to Puerto Rico?

– I haven’t considered it. I imagine that Maduro meant to say, you have one; I have one; let’s exchange them. But I am sure that the United States isn’t going to respond. I am Puerto Rican, and I am struggling for my homeland.

Independently of whether Maduro’s proposal has possibilities, it generated one of the broadest moments of exposure of your case on an international level.

– It was interesting to me that Univision covered it, as it has never before covered the case. I know they did it because it dealt with Leopoldo López’ case.

Have you heard what’s going on with your clemency?

– I don’t think there will be a decision in the very near future. When there is a decision, I think the pattern will be the same as (Jimmy) Carter and (Bill) Clinton followed, which took into account political interests. (He pointed out that Carter released four Nationalists in 1979 and Clinton granted clemency to a dozen members of the Macheteros and the FALN, including him, although he rejected it because it did not include all of his compañeros in 1999. In both cases, the decision was made in a year between legislative and presidential elections, as is the case with 2015).

Having received an offer in 1999 that would have resulted in your release over five years ago, and the fact that the Department of Justice is still sitting on your case is hard to understand, one would think that they have all the information at hand.

– No one can say that in the Department of Justice there is evidence to support punishing me the way they are. I am waiting for the FBI to show everything they have so I can be judged publicly. Seven months before I was sentenced, the very same judge who presided over my case told one of my compañeras that he wanted to give her the death penalty but the law didn’t allow it. If he had been impartial, he would never have sat as my judge. And I said that to him in court, without defending myself, but simply to make sure the record was clear.

Do you think that president Obama will make a favorable decision before he leaves the White House?

– Eventually he will have to make a decision. I know there are people who have talked to him directly about the case. If he had something to say against it, he would have said so. If he is a just man, and he looks at all the support from within and from outside Puerto Rico, he should make a positive decision.

Since the announcement from Cuba and the United States, there has been a lot of expectation about your possible release. With Mujica’s latest expressions, expectations grew. What do you say to people who are anxiously awaiting your release?

– We should not despair. It is important to never practice illusory optimism or sow false hopes. If president Obama is going to make a decision, he is going to protect himself and do it in a cautious way. The release of a Puerto Rican also isn’t a priority for him. No U.S. administration has ever made affairs related to Puerto Rico a priority. We are a colonized country, and the colonized is never a priority for the colonizer. I was involved in the campaign for the release of the Nationalist heroes, and I would feel exasperated, but we knew how to persevere and we kept sight of the goal that eventually they would be released.

What do you think of the decision to move toward the reestablishment of diplomatic relations between Havana and Washington?

– It should have happened a long time ago. It is something positive for Latin America. The policy toward Cuba has been absurd, just as it is absurd to still have people in the U.S. who carried out terrorist acts against Cuba.

How did you find out about it?

– I was in the room where I paint, and someone told me. I saw it on CNN. For me, it’s something personal. For four years my cellmate was Fernando González (one of the Cuban Five). I celebrated like the day Fernando left prison, or when my compañeros left prison (in 1999), or when our Nationalist heroes left prison.

Governor Alejandro García Padilla visited you last October, along with congressman Luis Gutiérrez. Were you surprised by the visit?

– I respect and appreciate that he had the courage and magnanimous heart to visit me as governor of Puerto Rico. I hope that everything he does is for the benefit of our people, even though there are differences of ideology and vision about the future of our people. I knew he would be coming, because Gutiérrez had encouraged him, and he had given his word.

Did you talk about the status?

– He has the traditional agenda of the Popular Democratic Party. I do not think there is going to be a change in his politics, so I didn’t even raise the topic of sovereignty.

What do you imagine doing in San Sebastián when you return?

– I am from San Sebastián, and I want to return to my roots. I want to do things to benefit the people. I think we need to develop strategies for the future. We need to think about creating think tanks, to establish strategies for Puerto Rico in the next 20 or 30 years. To form a united front, starting with independentistas and keeping stronger ties with the diaspora. We are losing our principal resource, which is people.

Your attorney Jan Susler said the other day that you have never wanted to be a hero or a martyr, but that the U.S. has turned you into a martyr.

– I never did anything to be a martyr. I have tried to do what I consider to be a citizen’s duty, to work to make Puerto Rico that garden of Eden we want it to be.