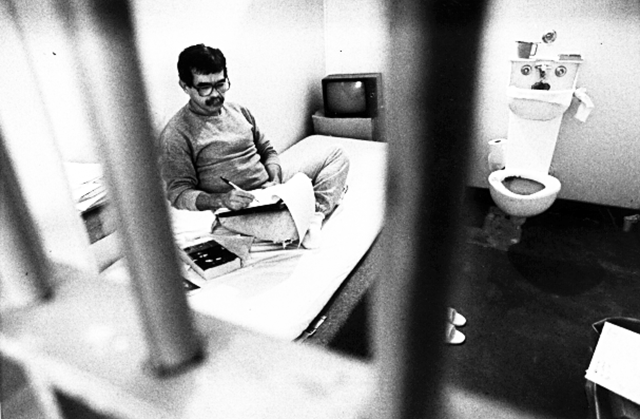 By Ana López and Matt Meyer

Community leader and a fighter for Puerto Rican independence, Oscar López Rivera, has been widely recognized as the “Nelson Mandela of the Americas”. Several Latin American heads of state referred to him as such at the 2015 Organization of American States summit, though López Rivera has for decades also enjoyed the staunch support of close Mandela associate Archbishop Desmond Tutu, the South African Nobel Peace laureate who headed that country’s Truth and Reconciliation Commission.  López Rivera, like Mandela, served most of his adult life behind bars, charged with the thought crime of “seditious conspiracy” for fighting for the freedom of his people. Unwilling, also like Mandela, to trade his principles or past strategic considerations for personal gain and a fast track to freedom, López Rivera passed up an opportunity for release with some of his political associates in 1999 because he refused to leave behind other associates not offered the commutation. At age 74 and after more than thirty-five years behind bars, Lopez Rivera was the political prisoner with the distinction of being the longest-held in the history of Puerto Rican-US colonial relations.

Born in San Sebastian, Puerto Rico in 1943, at age 14, López Rivera moved to the US with his family to the Puerto Rican community of Humboldt Park, Chicago. As a young adult, he was drafted into the US military and sent to fight in the front lines of Vietnam. He was awarded the Bronze Star for heroic service, returning to Chicago in 1967. Quickly politicized by the social change movements active at that time, Lopez Rivera became involved with many community empowerment groups that helped Oscar with the vision of creating community organizations that will serve the interest of the Humboldt Park. Based on the bilingual and educational needs of the neighborhoods he worked with, Lopez Rivera helped found the award-winning alternative Dr. Pedro Albizu Campos High School and the Puerto Rican Cultural Center, with his brother Jose and others. Further radicalized by the deep needs of the people, he eventually decided that clandestine work challenging US colonial control over Puerto Rico was necessary, joining the pro-independence Fuerzas Armadas de Liberación Nacional Puertorriqueña (FALN). At the time, the developing revolutionary processes in Puerto Rico were consistent with the national liberation struggles waged in other parts of Latin America and Third World countries.

Arrested in 1981, López Rivera (and his colleagues arrested in 1980 and 1983) declared themselves prisoners of war under criteria laid out by the Geneva Convention, and their sentences of 16 times longer than typically handed down for similar offenses  clearly reflected the political nature of their prosecution. Once imprisoned, López Rivera faced years of torture including sensory deprivation, over twelve years of solitary confinement, and subjugation to the super maximum-security practices of the prison-within-a-prison at Marion and Florence.

Perhaps the most striking similarity between Oscar López Rivera and South African former President Nelson Mandela is the humanity and strength of spirit developed and evidenced during their long decades of incarceration. In addition to his correspondence and writing activities, avid reading, and a turn towards vegetarianism, López Rivera became a proficient artist, specializing in portraits and tributes to his native homeland. His work has been exhibited throughout the world, sponsored by the international campaign for his release. In the last years before release, Oscar López Rivera helped produce two books of his writings, Between Torture and Resistance (PM Press, 2013), and Cartas a Karina (CAK Project, 2016). He has also authored many articles that have inspires future generations.

In addition to the Puerto Rico-based marches of thousands, the unity of all political tendencies and elected officials of every political party throughout the island, the “Oscar on the Street” campaign placed life-size cut-out photos of Lopez Rivera on walls and balconies throughout the island, a women-centered campaign of flash demonstrations sprung up in major cities throughout the world. The role of the Puerto Rican diaspora and allies played an importance force in favor of the Oscar Freedom Campaign.  Nobel Peace Prize winners from every continent, ultimately numbering over a dozen, sent letters, videos, and personal messages and participated in prayer vigils calling for López Rivera’s unconditional release – as did artists such as Lin Manuel-Miranda, Rene Pérez and Ricky Martin ( to mention a few), and elected officials throughout the US. In the United Nations session of the Committee on Decolonization months before Obama granted the commutation, an historic and unprecedented forty-plus representatives of countries and people’s movements joined the call, with the UN Committee itself officially stating that they would visit Oscar in prison and directly press the White House to shift the anti-humanitarian policy regarding Oscar.

A transcendent figure in contemporary Puerto Rican life, few were surprised to learn that Oscar Lopez Rivera’s plan for his life after prison is to develop the Fundación Oscar López Rivera- Libertá, which will deepen the unity and work for decolonization which has been the cornerstone of his entire life.

The Freedom Walk, originated by Batey Urbano member Michael Reyes Benavides, was a 185 mile trek from Terre Haute,...
About NBHRN