Oscar exhibits at “Inside Out” show in Vermont 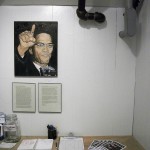 During the month of May, Puerto Rican political prisoner Oscar López Rivera participated in an art exhibition sponsored by Vermont Action for Political Prisoners (VAPP), to raise money for prisoner artists and their prisoner support funds. The exhibition, titled, “Inside Out” debuted at the Through the Music Gallery. The art exhibit was also featured in the Brattleboro Gallery Walk, which is held the first Friday of every month and includes art exhibits in over 50 locations around Brattleboro, Vermont. Thousands of people from across the region come to the event and have the opportunity to purchase artwork, which is up for the entire month.
In total, eleven prisoner artists exhibited, both political and social prisoners. VAPP also displayed artwork in a mock-solitary cell. Oscar’s painting on “Malcolm X” hung in the opening entrance to the gallery. There was both high attendance on opening night and throughout the entire month.

VAPP also works to continually keep conversations open about people’s struggles in the current political/economic system. In the past VAPP has hosted Robert King, Ramona Africa and the MOVE documentary, and participated in a regional Running Down the Walls. The art show was it’s first extended exhibit.

On behalf of the Puerto Rican independence movement, as well as on behalf of my brother, Oscar López Rivera...
Crime Against Humanity