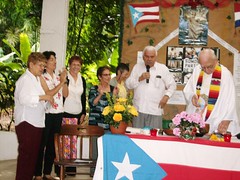 On February 3, 2008, the religious progressive community of Jesus Mediador came together to celebrate the 90th birthday of their priest, Padre Alvaro De Boer. The community, which consists of seven nuns and a Dutch priest, has worked in the neighborhood of El Volcán Bayamón for over 40 years.

Guided by principles of ministering to the poor and building a just society, this community has supported many struggles for justice throughout Puerto Rico — from the land liberation efforts of the homeless, to the campaigns for the release of political prisoners, and the struggle to end the U.S. navy’s criminal operations in Vieques.

Former political prisoners Rafael Cancel Miranda, Alicia Rodríguez, and Doña Isabelita Rosado, as well as activists of the Vieques struggle and the campaign against Paseo Caribe, came together in El Volcán to show their appreciation for the support that Padre Alvaro and the Jesus Mediador Community have given them. Padre Alvaro had desired to become a Puerto Rican citizen for many years. He was delighted to receive the written declaration acknowledgement, from Rafael Cancel Miranda and other former political prisoners.

Mercedes López and Clara Lugo (sisters of Puerto Rican POW Oscar López) presented Padre Alvaro with a painting of his likeness made by Oscar.