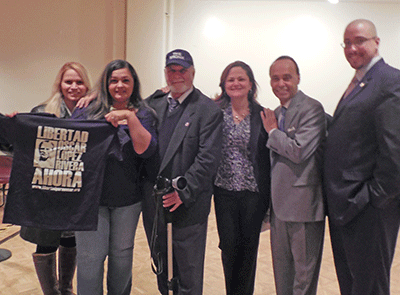 On Friday, Nov. 30, the progressive community of NYC attended a press conference at the 1199 Auditorium on West 43rd St organized to help bring Oscar home. NYC Councilwoman Melissa Mark Viverito, State Senator Gustavo Rivera and State Assemblyman Jose Rivera were all denied permission to visit Puerto Ricn political prisoner Oscar Lopez Rivera and it was only the day before the press conference that they found out. Congressman Luis V. Gutierrez, the principal speaker at the press conference, related his story of knowing Oscar and why he is moved to struggle for his freedom. Special messages were also read from Congressman Jose Serrano and Congresswoman Nydia Velazquez as well as Hector Figueroa, President of Union 32 BJ. Clarisa López, daughter of Oscar had also flown in from Puerto Rico to tell her story, of meeting her father for the first time at the age of 11 to becoming a spokesperson for the campaign to free her father.

Those present were also treated to scenes from “Crime Against Humanity,” the play co-written by Michael Reyes and Luis Rosa, based on real life interviews with Puerto Rican political prisoners.