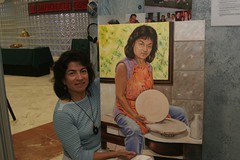 In Puerto Rico, the art exhibit Not Enough Space/Un Reto A La Locura had a profound impact on the campaign for the freedom of our incarcerated patriots Oscar Lopez Rivera and Carlos Alberto Torres. The exhibit was on displayed in some of Puerto Rico’s oldest cultural institutions such as El Fortín in Vieques, Museo Casa Alonso in Vega Baja, Plaza Artesanal in San German, and San Juan Casa Aboy and the Center for Puerto Rican and Caribbean Studies. It was also displayed in some of Puerto Rico’s most popular cultural institutions such as Centro de Usos Multiples in Culebra, Casa Pueblo in Adjuntas, Casa Corretjer in Ciales, Biblioteca Pública in Aibonito, and Coliseo Luis Aymat Cardona in San Sebastian. In San Sebastian, the exhibit was displayed during the Festival de la Hamaca, where thousands enjoyed the art work and ceramics and the mayor joined the growing chorus of persons and organizations who unconditionally support the campaign for the freedom of Puerto Rico’s political prisoners. In the Center for Puerto Rican Studies gallery, the exhibit opened on the Noche de Galerias held on the Tuesdays of every month in Old San Juan where almost all the institutions open their spaces for the display of art and has also become a center of expression of popular support of the Puerto Rican people.

During the closing of the exhibit in Old San Juan, Dr. Raquel Rosario Rivera from the University of Puerto Rico in Bayamon made an eloquent and moving presentation that shed light on Maria de las Mercedes Barbudo, 1773- 1849, considered the first Puerto Rican woman independentist and political prisoner. The exhibit complemented the Committee for Human Rights’ effort to educate our people as to the existence of political prisoners, which is part of the national and international human rights campaign led by the Human Rights Committee in Puerto Rico and the National Boricua Human Rights Network in the United States.