The Puerto Rican Day Parade, Inc., one of Newark’s most important Puerto Rican institutions, has decided to honor Oscar Lopez Rivera and to call for his immediate release by the Obama administration on a humanitarian basis. The Puerto Rican Day Parade, which will be held on Sunday, September 18, 2016 in Newark’s North Ward hosts a series of activities leading to the parade, many which will also be focused on the release of Lopez Rivera. In 2016, the Puerto Rican Day Parade will celebrate its 55th Anniversary, a reflection of the vibrancy and importance of the Puerto Rican community in Newark. The Puerto Rican Day Parade joins the Newark Municipal Council who passed a resolution on December 2, 2015 calling on President Obama “to grant clemency to Oscar Lopez Rivera so that he is immediately released from prison, as his continued incarceration is unjust and serves no legitimate purpose.” The New York City Municipal Council passed a similar resolution in April 2015. Oscar Lopez Rivera was imprisoned in 1981, along with 13 other men and women, and charged with seditious conspiracy for their involvement in activities for Puerto Rican independence. Lopez Rivera was made to serve 12 years of his sentence in solitary confinement. In 1999, President Bill Clinton offered to commute his sentence, as well as the sentences of all but two of his co-defendants, noting that Lopez Rivera was never convicted of specific violent crimes resulting in death or injuries, and that the sentences were “out of proportion to their crimes.” Lopez Rivera, refusing to leave any co-defendants behind declined the President’s offer of clemency. All of the other men and women sent to prison with Lopez Rivera have since been released and are leading productive and responsible lives. Oscar Lopez has now served over 34 years in prison. 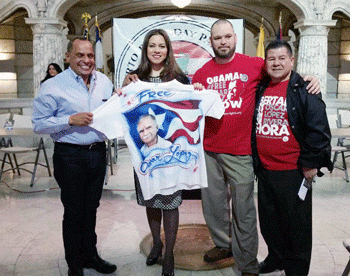 Oscar Lopez Rivera has served more prison time than Nelson Mandela for similar charges of sedition. Many prominent persons, including President Jimmy Carter, Archbishop Desmond Tutu, Coretta Scott King, and other Noble Peace Laureates, politicians and world leaders have called for his release. In 2013, Archbishop Desmond Tutu declared that “in any case or interpretation, justice cannot be served by keeping Oscar Lopez Rivera in prison.” The United Nations Decolonization Committee has repeatedly called on the United States to release Lopez Rivera. PUERTO RICAN DAY PARADE, INC. The movement to release Oscar Lopez Rivera has become a unifying cause for the Puerto Rican people, bringing together all political parties, religious institutions, labor organizations, and people of widely diverse political beliefs in a humanitarian campaign for his release. All the Puerto Rican representatives in Congress have joined their voices to this movement, along with the Hispanic Congressional Caucus. In 2013, the present Governor of Puerto Rico, Alejandro Garcia Padilla, who has visited Lopez Rivera in prison declared that this is “an issue that must rise above partisan affiliations and status preferences…. it touches basic issues of humanity, justice, and compassion.” It is with this humanitarian vision of compassion and justice that the Puerto Rican Day Parade lends its support to this movement, as part of the overwhelming support in the Puerto Rican community for clemency for Oscar Lopez Rivera. Simply put, we are very excited to dedicate the parade to Oscar Lopez Rivera. In addition to Oscar, the parade is also dedicated to the town of San Juan, and to those whose lives have been touched by Alzheimer’s disease. 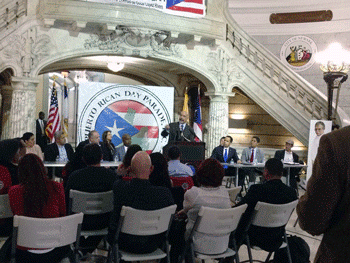 Nelson “Butchie” Nieves, President of the Puerto Rican Parade stated that the parade
supports his release on a humanitarian basis, and would like to see Lopez Rivera march in the parade in September. Nieves stated that “after 34 years, its time to bring him home.” JossueTorres, Executive Board member of the parade stated that “we are doing this because it simply makes sense. Oscar’s case has transcended and is an obvious miscarriage of justice. The parade as an organization is being explicitly clear that we are honoring him solely as his case is a humanitarian issue. We have no position or viewpoint on political ideology or standing.” Torres reiterated that “Now, it is our great hope that on Sunday, September 18th, Oscar will be with us. That is what we want. And to that end, our call to action is that every person, every group, every organization and entity that supports Oscar will march with us.” Those groups wishing to participate in the parade can register for free at www.prdpnj.org. Torres stated that “if in the very unfortunate circumstance that he is not with us that day, we want to lift our voices up so loud, so proud, that he hears the message all the way in Indiana.”