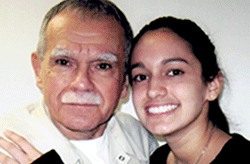 A press conference/rally on Friday, November 30, at Local 1199 Auditorium,
310 W. 43rd St., at 6pm, will serve as a “send-off” to a delegation of New York elected officials who will accompany U.S. Rep. Luis Gutiérrez (Illinois) on a special visit to meet with López Rivera in federal prison in Terre Haute, Indiana on Sunday December 2.

Oscar López Rivera has served more than 30 years in prison for his political beliefs, he was not accused or convicted of causing harm or taking a life. He is serving a sentence of 70 years. His release date is 2023.

Elected officials, leaders of churches and religious organizations, leaders of the community, and activists in the City and State of New York are adding their voices to the growing chorus asking for López Rivera’s release from prison. “After serving 31 years in prison, it’s time to bring him home,” said Council member Mark Viverito.

“What a holiday gift it would be, for Oscar to celebrate Christmas with his family for the first time in over three decades,” said his daughter, Clarisa, who will also be at the press conference. Download the press release here.

August 22, 2020
Previous articleSuccessful forum on the Cuban 5 and Oscar López Rivera
Next articleSend a Message of Love and Support to Oscar for the Holiday Season