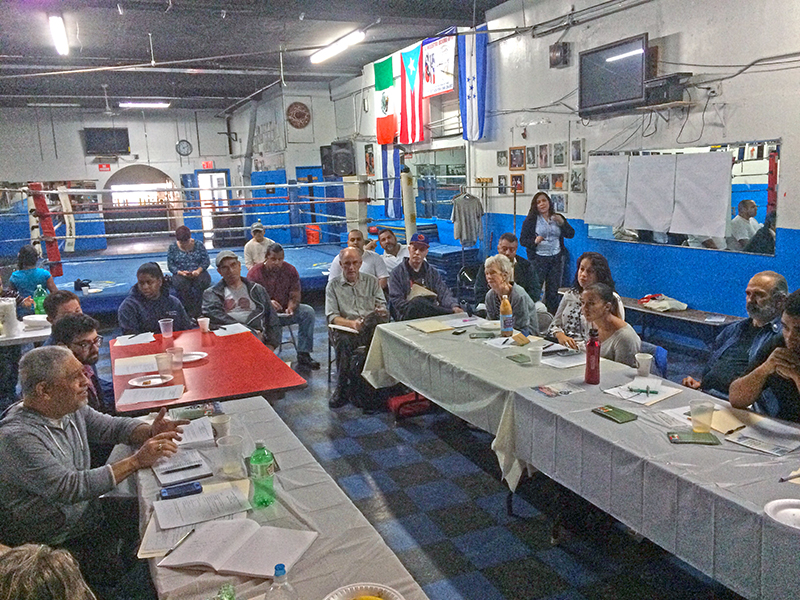 During the Martin Luther King weekend, the National Boricua Human Rights Network (NBHRN) held a national meeting at El Maestro in the Bronx New York. El Maestro is a community-based organization that promotes culture and sports for the surrounding area of the South Bronx. The name El Maestro is in reference to the popular name for Dr. Pedro Albizu Campos. The purpose of the meeting was to strategize about the upcoming efforts in the United States to seek the freedom of the Puerto Rican patriot Oscar López Rivera. More than 50 representatives from the following cities attended; San Francisco, Chicago, Detroit, Cleveland, Philadelphia, New York, Hartford, New Haven, Massachusetts, and Orlando. Two representatives from a monthly event “32 Women for Oscar”, Annette Diaz and Alida Millan Ferrer from Puerto Rico, one of the highlights of the meeting was the presentation by the 2 women. The meeting began with a presentation by them and culminated with an event of the celebration of the 100th anniversary of the birth of Oscar Collazo.

Prior to the meeting various youth from different universities met and mapped out ideas on how to engage universities students in the campaign. From Northeastern Illinois University (NEIU) Alyssa Villegas representing Que Ondee Sola, and Rebecca Rios representing the Union for Puerto Rican Students (UPRS) were active participants. During the meeting, I was able to interview a representative from various parts of the US including the renowned Puerto Rican artist Miguel Luciano.

The following are excerpts of those interviews;

I met the other [former] prisoners before I met Oscar. All of them have had a really profound impact on me. As a Christian and as a minister, they confronted me, just by their life, with a question: What did I care about? What was I committed enough to risk going to jail for a long time or lay down my life for? I have never been in the armed forces. I’ve never been a cop or firefighter. You know that in those kinds of jobs you routinely put your life on the line. And in the United States being a Christian, according to just going to church and stuff, is pretty easy. It doesn’t involve risk. So it was actually meeting the former prisoners and Oscar that raised those [questions]. I have had the privilege of knowing Oscar and meeting him personally, [but you also] get a feel [for him] in the letters to Karina. Or when people talk about their time with him they start glowing… He is disciplined, brilliant, creative, caring, and compassionate. All of those things, and in ways that call us to be better people; call us to be our best selves, the way he tries to be his best self every day. He doesn’t have to get up at four in the morning to do his exercise. He doesn’t have to continue trying to paint in a rec room so cold his fingers freeze and the paint hardens. He doesn’t have to do these things that he has continued to do to maintain himself to maintain his dignity and maintain his contributions. Anybody would say that he has already given more than anybody could be expected to give. And yet he is not sitting back and saying, well “ok I’ve done my time, I’ve done enough. It’s up to you.” No, he’s in there every day, working harder than the rest of us. Not primarily for his own release, but to make the world a better place.

The struggle for Puerto Rican independence and the struggle to free of the [political] prisoners has been a really significant part of my life. It has connected me to the whole struggle against colonialism in Puerto Rico and to a vibrant, incredible people and movement. I think being a part of this has been a defining tenet of my life.

I think of his example of determination and also longevity. The fact that 30 years have gone by and we are still fighting is very important. People will always say to me, why do you keep doing it and I always say, well why not? We have to. If we can’t show that we can free our political prisoners that are stuck in there, then how can we have a movement to free everybody? These people personify the struggle for real democracy and for freedom. So we have to be part of that. Why would anybody fight…if they don’t know we have their back?

Oscar influences me because I feel that he has done so much. It makes me want to push myself to do more. As one of the compañeros said earlier, everything we do is so little compared to what he has done. He’s been in there more than I’ve been alive – to put it into perspective. That alone, not to mention all of the stuff that he did before he went to jail. It’s inspiring for me because I could be doing more. I am able and capable of doing more because of what this person did.

When I found out the truth about colonialism and Puerto Rico, and the fact that there were Puerto Rican political prisoners and that there was a man such as Oscar López Rivera, it was the missing link for me to all the questions [I had] about why the conditions of my family, my life, and my community were the way they were. He is sort of the missing link to my historical identity. That was how I found myself as a Puerto Rican woman. Before that point, I was lost…I didn’t have a complete understanding of my identity, of who I was. [Learning that] gave me purpose…and the drive to go find out the truth about my life, about my experience, and my identity.

I think the question for me is how has he influenced me as a person first? In terms of his sacrifices and what he represents, what he stands for. Symbolically, he represents something that’s bigger than himself. He always has. So that’s an opportunity to look at ideas of sovereignty, independence, culture, and identity. I am thinking about the ways that art actually can make an impact in our lives in real and tangible ways sometimes. And also encourage us to reflect on our relationships to communities. That’s why the idea of this postcard project, or whether you’re making a painting or other kinds of work, the importance is getting out in the world in some way. There are all different ways to engage and express… The whole thing is about the power of communication. I just think that the work is really intentional. It has the potential to get out there and actually open people’s minds and educate. Oscar’s story is so important for people to know about. There’s a real urgency, especially now after 32 years, for this thing to get done, for him to be free. I think the more artists we can bring into this [campaign] the better. And there are lots of ways that I think artists can express ideas about freedom and solidarity. Freedom is something we understand universally.

I have to say first that I am not Puerto Rican. However, Oscar represents a lot of things to me. He represents to me the independence of Puerto Rico. For me, he also represents a struggle for community. Oscar defines what it means to give yourself to a movement and serves as an example of giving your whole life to that. It is really hard to think of myself in that light and I do whatever I can to help. It is kind of like what the compañera from Puerto Rico was saying, which is that we give so little compared to what Oscar has done and is doing not just for the Puerto Rican struggle, but for the Latino struggle.

Oscar means my life. He has been my whole life. He has been the one person that’s kept my family unified despite the insanity of his incarceration and the impact of it. His spirit and how correct he has been of the decisions he has made throughout his life has been a big unifying force in my family and has brought us together. It gives our family a different historical course of existence. He is an example to us. We have been able to be part of that movement to free Puerto Ricans, because of him.

I think that all of us should be inspired to be like him. He is someone that has principles and who is willing to give his life for his people.  As I said, I think we all should be inspired to be like him, but also work to get his freedom, because it is freedom fighters like him that are persecuted that the rest of us have the obligation to go out and do the work in order to free him.

I have been involved in all of the campaigns to free Puerto Rican political prisoners since I was very young. I was involved in the movement to free the five nationalist and also involved for 20 years to free the compañeros in 1999. To me, Oscar is the legacy of the work that I’ve done. He’s been the role model and the mentor that in order for the people in Puerto Rico to be free we have to take it to the streets and organize. Oscar in this moment of the campaign has become a symbol of liberation for all people not just for the Puerto Rican people.  I admire Oscar for his commitment and his strength. It’s important that we learn from his strength and work and use it to do great work in our own community.