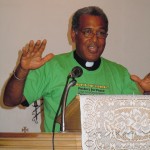 A crowd of 50 enthusiastic well-wishers and supporters greeted Father Luis Barrios and the 22nd Pastors for Peace Caravan to Cuba last Sunday, July 10 at the Adalberto United Methodist Church. Pastor and activist Emma Lozano began the event with a service and powerful service linking the Cuba Caravan to the struggle to free the Cuban Five, to immigration reform and finally to the campaign to free Oscar López Rivera. Peggy Valdés, the MC and representative from the Chicago Cuba Coalition, then introduced Father Luis Barrios, a former pastor of St. Anne’s Church in NYC and professor at John Jay College, spoke eloquently on the need to challenge US policy on Cuba. Peggy then introduced Ricardo Jiménez, former political prisoner and co-coordinator of the National Boricua Human Rights Network. Ricardo traced the evolution of puerto Rican political prisoner from the turn of the century to the present, concluding with the present situation of Oscar López Rivera and making a powerful call for solidarity with the campaign to free Oscar, as wells the Cuba caravan and the Cuban Five. Last to speak was Chastity, a young African-American woman that spoke on the program in Cuba that offers free medical school for young people of color in the US, as well as Latin America. Having Successfully finished the program, she is now interning at Alivio Medical Center. A follow up meeting for interested youth is planned for the fall. Centro Sin Fronteras, the Chicago Cuba Coalition and the National Boricua Human Rights Network organized the event. Listen to Ricardo’s message below.

The below blurb was written for the forthcoming book, tentatively titled, Finding the Struggle: Radical Movements in the Neoliberal United States, 1970-2001, to be...
Human Rights

Attorney Luis Abreu Elías, who represented Ojeda Ríos in the past, asked international organisms to investigate the assassination. By Inter...
Human Rights