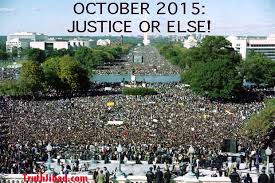 I greet you in the name of the Puerto Rican political prisoners in U.S. prisons charged with seditious conspiracy for their actions on behalf of Puerto Rico’s right to be a free and independent nation.

I salute Minister Farrakhan, the Nation of Islam, and all who have labored to celebrate the 2nd Anniversary of the Million Man March with their Day of Atonement.

A delegation from the Puerto Rican community has come today to demonstrate our solidarity with you on this momentous occasion. Our presence here tonight, we hope, will be the beginnings of a dialogue among our communities that will become an everlasting bridge for our peoples.

We must realize we have a common history, and therefore a common destiny. The entire history of the past 500 years or so has been a process of taking us out of history – to the point where we are constantly told we have no history. We have been lied to, we have been objectified – transformed from subjects to objects. But somehow, dangerous memories lurk in our minds, memories of those who kept alive the flames of resistance and whose example inspires us to struggle. One of the most interesting examples of the importance of this memory is found in the traditions of the Puerto Rican santero (wood carver) depictions of the three wise men – the three kings unlike any other people. In our tradition, the three are seen riding on horses, not on camels, but on a particular breed of horses – the Paso Fino – a descendant of the Arabian horses brought to Puerto Rico. But, most importantly Puerto Rican wood carvers always place Melchor in the middle, riding a white horse. Melchor in our tradition is the Black King. Why is Melchor in the middle? Any time three people travel together it is the one in the middle that leads. Thus, it was the mulatto hands of the wood carver in search of his African roots, who place Melchor – the only Black King that he knew – in the middle. It was this creative being’s search for his Black identity in the dangerous memories of his African heritage that allowed him to create this cultural icon – it was a similar search for his African roots – his Blackness – which drove the Puerto Rican Arturo Alfonso Schomburg to create the greatest collection of Africana – the Schomburg Collection in New York City – to help usher in the Harlem Renaissance.

It is a historical imperative that we search for common memories of resistance as well as to articulate new methods of struggle. Albizu Campos once said the U.S. wanted the cage but not the bird. The history of these United States – the only country in the world without a name – is one of exclusion. Every state that has been incorporated into the Union has done so through the efforts of the new settlers, not the original inhabitants – the original inhabitants have been driven out and excluded from the decision-making process. All that has value for this country in terms of Native Americans, Blacks, Mexicans, Puerto Ricans, Hawaiians, Aleuts and Inuits is these people’s labor and land.

That is the history of America. That is why what the great Black writer DuBois wrote in the Souls of Black Folk in 1903, is still true at the end of this century: “the problem of the 20th Century is the problem of the color line.” And, that is why this maxim still resonates, “The nation has not yet found peace from its sins.” The sins of Colonialism and Racism are the historical problems of this country, and atonement for America is the only answer, or as the Native American Chief Seattle said in 1855, “Tribe follows tribe, and nation follows nation, like the waves of the sea. It is the order of nature, and regret is useless. Your time of decay may be distant, but it will surely come, for even the white man, whose God walked and talked with him as a friend, cannot be exempt from the common destiny. We may be brothers after all. We shall see.”

• Its prisons and jails are filled to capacity with 1.5 million people  – 65% to 70% who are Blacks, Mexicans, Puerto Ricans and Native Americans;
• It seeks to divide families by deporting parents who are not yet citizens, but whose children were born here;
• It keeps more than 100 political prisoners in its gulags.
• It keeps the people of the Virgin Islands, Samoa, Guam and Puerto Rico as classical colonies.

Together we will make the 21st Century the Century of Human Dignity.