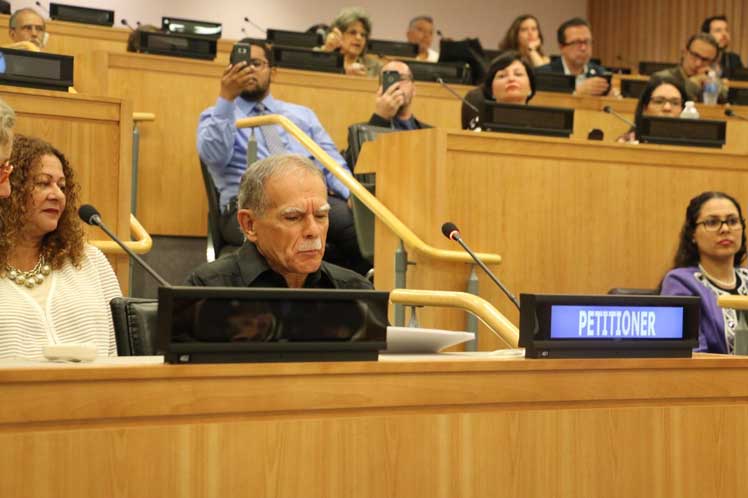 United Nations, Jun 19 (Prensa Latina) The Puerto Rican pro-independence leader Oscar Lopez Rivera today denounced at the United Nations the impact of the colonial presence of the United States on that Caribbean island since 1898.

Speaking at a session of the United Nations Special Decolonization Committee to analyze the situation in Puerto Rico, Lopez Rivera warned that depopulation has been one of the priorities by the colonial power.

At present, five million Puerto Ricans live in the diaspora, while less than 3.5 million live on the island, he noted.

According to Lopez Rivera, unemployment, social insecurity and privatization have worked together under U.S. domination to generate a scenario of poverty and despair, as a result of which many people, including professionals and skilled personnel, have decided to emigrate.

It is a problem that threatens to make us lose our homeland, identity, culture and everything that makes us Puerto Ricans, underlined Lopez Rivera, who was recently released from a U.S. prison, where he spent nearly 36 years for defending his pro-independence ideas.

He noted that once again, colonialism proves to be a crime against humankind and must end.

Lopez Rivera also denounced the damage caused by a board of fiscal control imposed by the U.S. Congress to deal with a 72 billion-dollar debt, a mechanism that he blamed for looting every cent from Puerto Ricans.

In that regard, he noted that the current situation on the island is worse than the one existing 36 years ago when he was incarcerated for his ideas.

According to the Puerto Rican patriot, more than ever, his people need world support and that the UN General Assembly takes care of the case until the colonial status is ended.

Lopez Rivera defended the hope that one day Puerto Rico will be decolonialized and will enjoy sovereignty and self-determination as another member of the community of nations.

Regarding his personal situation, he said that the nearly 36 years that he spent in a U.S. prison have not weakened his struggle, because when you defend a just and noble cause, nothing should be considered a sacrifice.

Oscar López Rivera at the United Nations:  What USA has done to Puerto Rico

What has United States colonialism done to Puerto Rico and the Puerto Rican people? Allow me to share with you some of the most deleterious problems caused by colonialism in Puerto Rico that I have observed since my arrival in my beloved homeland.

Honorable members of the United Nations Special Committee on Decolonization:

It is a great honor for me to be able to stand before you and to express my heartfelt gratitude for every resolution this August body has passed supporting Puerto Rico’s right to be an independent and sovereign nation and the excarceration of the Puerto Rican political prisoners.

On the 17th of May of this year, I was finally excarcerated. Had it been the 29th of May, I would have been in prison for 36 years – almost half of my life. During those years, the resolutions that this Honorable Committee passed were always a fountain of hope and strength for me. I would read them and would find in them precious expressions of solidarity and compassion, and it would make me feel that some day Puerto Rico would be decolonized and a free and sovereign nation like the ones you represent here.

I have spent five decades serving what I believe is the most just and noble cause any Puerto Rican citizen can serve. Doing it has been an act of love and fulfilling my duty as a citizen. And because I believe that when one serves a just and noble cause, it is never a sacrifice, even if it means giving one’s life doing it. I say this to let people know that for me, serving a just and noble cause has been the most liberating experience I have had, and that in spite of all the horrible things done to me during the years I spent in prison, I have come home with my head high, and my honor, my dignity and my spirit stronger than the day I was sent to prison.

While the u.s. government alleges there aren’t any political prisoners in its gulags or terrorists on its payroll, it claims there are many in countries it doesn’t like. I found it interesting that its partners in crime in Puerto Rico condemned me for speaking with President Maduro the day I was released from prison and asking him to release the prisoners in Venezuela they consider to be political prisoners. I am certain that the prisoners the u.s. government considers to be political would never entertain the idea of asking the u.s.  government to release all the political prisoners in u.s. or in Guantánamo. And much less would they ask the u.s. to bring to justice the terrorists on its payroll who have killed independentistas in Puerto Rico or to stop practicing the crime of colonialism and allow the Puerto Rican people to exercise its inalienable right of self-determination and allow Puerto Rico to be an independent and sovereign nation.

What has United States colonialism done to Puerto Rico and the Puerto Rican people? Allow me to share with you some of the most deleterious problems caused by colonialism in Puerto Rico that I have observed since my arrival in my beloved homeland. Today there are over five million Puerto Ricans living in the diaspora, while there are less than three and a half million living in Puerto Rico. I found a Puerto Rico under the control of a Fiscal Control Board imposed by the u.s. government that has the power to dictate to the colonialists who help to administer the colony, what to do, especially when dealing with the payment of the $72 billion debt Puerto Rico owes to the banks and hedge funds. And I have seen an accelerated gentrification process constructing condominiums costing one million dollars or more.

Since I am familiar with what gentrification does to poor people, I know the luxury condominiums are not being built for them. The poor people are displaced; once the expensive housing is built, only the rich and super rich can live there. In Culebra, Vieques and around the coast of Puerto Rico, where the beaches are the most beautiful, the construction of luxury building is already overtaking the landscape. The colonialists who administer the colony give incentives to the builders and to buyers who are foreigners, and denies providing incentives to small businesses and small home owners. On the contrary, the small businesses and small home owners are taxed to the maximum. So what gentrification is doing is forcing poor people to move, and most likely to emigrate to the diaspora. This will cause more depopulation in Puerto Rico.

It has been the goal of the u.s. government, since it invaded and occupied Puerto Rico, to depopulate it. By 1900 it was already forcing Puerto Ricans to emigrate to far away places like Hawaii and the southwestern states on the mainland. After World War II the United States government started another forced emigration wave. More of the land that the poor Puerto Ricans were forced to abandon was used for military bases and for the construction of luxury hotels to foment a tourist industry. And the last wave began 17 years ago. More than one million Puerto Ricans have moved to the diaspora, causing the biggest brain drain in Puerto Rico’s history, because most of the emigrants are professionals, such as doctors, engineers, teachers, architects, nurses and other health workers.  If the School of Medicine in Puerto Rico graduates 100 doctors, 85% of them have to emigrate. There aren’t jobs for most young professionals. Their only option is to emigrate.

Imagine if such a loss of population were occurring in your countries. Any country that loses two-thirds of its population, including its best-developed human resource, cannot see itself having a strong economy and good quality of life for its citizens. And in Puerto Rico we are starting to see the negative effects of the last wave of emigrants. We are already seeing a larger aging population that is becoming poorer and poorer and with less medical and social services available to them. The future for them looks bleak. And at the same time young people of reproductive age are leaving Puerto Rico, and more foreigners are buying the expensive condominiums or living in enclosed upper class communities.

If the displacement and depopulation of  Puerto Ricans is an alarming problem, what the Fiscal Control Board is making the colonialist administrators of Puerto Rico do is more worrisome. For starters, by August 169 schools will be closed. Teachers will be losing jobs, and communities, especially the poorer ones, will be losing their schools. Behind the scenes the colonialists are pushing more and more their privatization plans. They aren’t satisfied that privatization in Puerto Rico has played a major role in bringing the economy to its worse conditions in Puerto Rico’s history.

But beside closing 169 schools, it is threatening the future of the University of Puerto Rico. The goal of the Fiscal Control Board is to take away close to half a billion dollars from the University’s budget. At the same time, it is looking for ways to raise the tuition and to force the University of Puerto Rico to close some of its eleven campuses and to sell much of its property, specially land that it has been using for experiments in the past. What the Fiscal Control Board seems to be doing is trying to privatize the University system. All the money that will be taken away from the public education system will be used as payment to fill the coffers of the Banks and hedge funds. While Puerto Ricans will be poorer and more destitute, the colonialists and the banking industry will become richer. Thus Puerto Rico is being made poorer and poorer and at the same time depopulated of its native population.

In spite of the fact that the future of Puerto Rico looks very bleak, many Puerto Ricans believe this is the best moment to wage an effective decolonizing process. We know that the majority of Puerto Ricans love Puerto Rico, our national identity, our culture, our language, and our origins. We see the potential that Puerto Rico has to become a strong nation and an asset to the economy of Caribbean and Latin American countries. We have the human resources and the other basic resources to transform Puerto Rico into the edenic garden it has the potential of being.

Colonialism is a crime against all of humanity. If the u.s. government is the nation of laws it claims to be, then it behooves it to decolonize Puerto Rico by adhering to the tenets of international law that prohibit the crime of colonialism.

I hope you will do whatever you can to bring to an end the colonial status of Puerto Rico, to help us make Puerto Rico the nation it has the potential of being, and to be part of the community of nations.