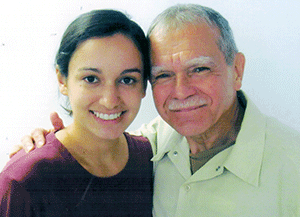 2nd Letter by Oscar López: “Where the Sea Breathes”

This is the second letter of López to his granddaughter Karina
Published Sept 14, 2013

On Saturday, El Nuevo Día periodically publishes letters that political prisoner Óscar López Rivera sends from jail to his granddaughter Karina, who has only known him through the prison bars.

Dear Karina. After the family, what I miss most is the sea.

Thirty-five years have passed since the last time I saw it. But I have painted it many times, the Atlantic part as well as the Caribbean, that smiling foam of light mixed with salt in Cabo Rojo.

For any Puerto Rican, it is almost incomprehensible to live far from the sea. It’s one thing when you know that you are free to move wherever you want and travel to see it. It doesn’t matter if it’s cold and gray. Even if you’re seeing it from a distant shore, you realize that it is always beginning again (as a poet said), and that through this sea, the fish that had been near your land can come to you, bringing memories of home.

I learned to swim at a young age, I must’ve been about three years old. A cousin of my father, who lived with us and was like an older brother to me, used to take me to the beach where he swam with his friends, and throw me into the water so that I would learn. Later, when I was in school, I would escape with to a nearby river with other kids. Now this all seems very far away.

Here in prison I have often felt nostalgia for the sea; to fill my lungs with its scent; to touch it and wet my lips — but instantly I realize that it may be many years before I enjoy this simple pleasure.

I always missed the sea, but I think that I never needed it more than when they transferred me from the prison in Marion, Illinois, to the one in Florence, Colorado. In Marion, I went to the patio once a week, and from there I saw the trees, the birds… I would hear the noise of the train and the song of the cicadas. I ran on the earth and smelled its fragrance. I could pick the grass and let the butterflies surround me. But in Florence, all that came to an end.

Do you know that the ADX, which is the maximum security prison in Florence, is the destination of the worst criminals in the US and is considered the hardest and most impregnable of the country? There the prisoners have no contact among themselves; it is a labyrinth of steel and cement constructed to isolate and incapacitate. I was part of the first group of prisoners to be held there.
When I got there, they woke me up various times throughout the night and for much of the time I did not manage to sleep for more than 50 minutes at a time. In that galley there were only four of us, but one of them had a long history of mental problems and he spent the night shouting obscenities, fighting his battle against invisible enemies. We were in our cells almost all the time, and even ate in them. All the furniture was made of reinforced concrete and could not be moved. I could not understand how the people in the town of Florence had accepted having such an inhuman prison in their neighborhood. But, day by day, the prison industry is among the strongest in the US. It produces money and that seems to be the only thing that matters to them.

In Florence, at night, the prisoners would communicate through a sort of vent near the ceiling. We had to shout in order to be heard; everyone shouted and that got on our nerves.

I kept quiet and tried to concentrate on the sound of the waves, closed my eyes and I saw them break on the Indian Cave. The cacophony of the prison went on fading. The sea rose and fell like someone’s chest, contagious with its living force.

I know that one day I will spend all night on the coast, and I will wait until the break of day. Later I would like to do the same in Jayuya, to see the sun disappear over the cordillera.

With this hope, in resistance and struggle, your grandfather embraces you….