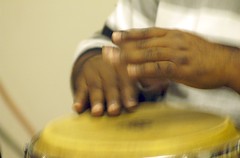 On Sunday, January 6, 2008, La Capilla del Barrio celebrated its annual Three Kings Day service in a special way. This year’s Three Kings Day service was dedicated to Oscar López Rivera, who was born on January 6. The congregation celebrated this occasion by singing Las Mañanitas, letting Oscar know that he was not alone on this historic moment in his life. Rev. Walter Coleman of Adalberto United Methodist Church led the sermon and that called for unity among Puerto Ricans and Mexicans against the separation of families through this country’s broken immigration laws.

Invited guests included Centro Sin Fronteras, the Puerto Rican Cultural Center and the National Boricua Human Rights Network. La Capilla’s worship team provided music along with Frank Dí­az of the Chicago Salsa Musicians Workshop. Alicia Rodríguez was the special guest; she is a former Puerto Rican political prisoner who was released in 1999, along with ten others, after serving almost 20 years in prison