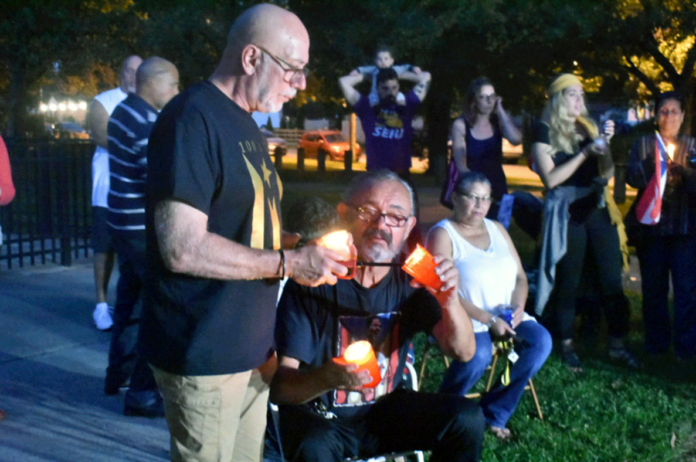 On September 20, the winds of consciousness, commitment, courage, and change blew through Cleveland’s Roberto Clemente Park in a 7:30 candlelight vigil to commemorate Hurricane Maria. The vigil of 50 participants was the largest special Puerto Rican historical/political event I have seen in Cleveland, combining broad representation by Cleveland’s Puerto Rican leadership, critical political analysis, and artistic expression. Kudos and thanks to organizer Selina Pagán of the Puerto Rican Voter Project and emcee Yasin Cuevas of Project Model Institute and Miss Ohio Latina for their awesome work!

As people arrived at the vigil, a painting by artist Tania Gonzalez unfolded before their eyes. Pastor Sara Parilla of the Ministry Sustained By Your Grace church led an inspiring prayer, followed by a powerful rendition of the Borinqueña led by Beatrice Gómez.

Scholar/author Dr. Raquel Ortiz spoke about the Puerto Rican Heritage Cultural Ambassadors’ work to advocate for relief and articulate the stories of otherwise politically voiceless hurricane survivors. Dr. Juan Molina Crespo, Executive Director of the Hispanic Alliance, said that the post-hurricane debacle was not just due to government incompetence and corruption, but that its failure was inherent in Puerto Rico’s dependent relationship with the US. New Genesis, a fiery young brother-sister hip-hop/ poetry/activist duo, presented a hard-hitting poem, An Epitaph for Puerto Rico.

The program culminated in a candle-lighting led by Sonia Matos, working out of Denison Ave. UCC, who helped resettle over 1,142 people displaced by the hurricane. Special recognitions should go to Sonia Matos, Angelo Ortiz of the Auténticos car club, and Gerardo Colón for their roles in networking and mobilizing the turnout for this event.