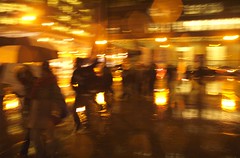 Over a hundred people, convoked by the National Boricua Human Rights Network, turned out in the cold and pouring rain in Chicago on Thursday, January 10, at the Federal Plaza to condemn the recent subpoenas of three young Puerto Rican activists by a Federal Grand Jury. The subpoenas, returnable on January 11, 2008 in Brooklyn, New York, are part of what the US government is alleging is a “terrorist” investigation of the Macheteros, a pro-independence, clandestine organization. The three young activists, Tania Frontera, a graphic designer, Christopher Torres, a social worker, and Julio Pabón Jr., producer and director, are involved in different movements for social justice as well as the Puerto Rican independence movement, in New York City. Michelle Morales, NBHRN coordinator, activist Héctor Rivera and attorney Jan Susler of the Peoples’ Law Office spoke at the rally.