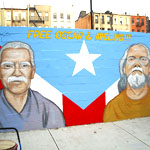 In just the past couple of months, over 25,000 letters have been collected throughout the US and Puerto Rico in support of the release of Puerto Rican political prisoner, Oscar López Rivera. Oscar has been incarcerated since May 1981 and is now entering his 30th year of incarceration. He was charged with “seditious conspiracy,” a political charge, due to his active involvement in the Puerto Rican independence movement. To celebrate the successful letter campaign and to discuss the future of Oscar’s campaign, members of the National Boricua Human Rights Network (NBHRN) assembled in New York City on December 10 and 11. Community activists, leaders and students came from places like Chicago, IL, Cleveland, OH, Worcester, MA, Providence, RI, and Philadelphia, PA. Received by the New York chapter of NBHRN and its supporters, several events were hosted in Spanish Harlem (“El Barrio) and the Bronx over the course of these two days.

On December 10, International Human Rights Day, participants took to the streets of Spanish Harlem to get letters filled out for Oscar. Whether they were talking to people rushing to get home, heading to the subway or just causally shopping down Lexington Ave., activists noticed great interest and popular support for Oscar. In under an hour, over 130 signatures were gathered in the cold.

The following morning coordinators of NBHRN gathered for a national meeting at the Julia de Burgos Cultural Center in Spanish Harlem. Over 20 key activists attended the meeting to discuss the status of the letter campaign and details about Oscar’s upcoming parole hearing. After the meeting, NBHN transitioned to the centerpiece of its national gathering, a two-part educational and cultural program. The first program was hosted by hip hop artists, Intikana (NYC) and Lah Tere (Chicago), who contributed meaningful reflections, poetry, and energy to the event. Prior to the principal speakers, there was a short memorial for Marcy Schulman, who was a longtime supporter of the Puerto Rican political prisoners and the independence of Puerto Rico. The audience was treated to variety of issues and themes by speakers. José López, Oscar’s brother and Executive Director of Chicago’s Puerto Rican Cultural Center, shifted the discussion towards the future. He commented that in the next period Puerto Ricans will become an important electoral constituency and the need to participate actively in the immigrant rights movement. He concluded by positing the notion of the “Citizenship of the Americas” as a response to hypocritical agenda of U.S. imposed “free trade”. The second half of the program emphasized the rich cultural production of Puerto Rican activism. Participants walked through El Barrio to a mural commissioned by the NBHRN New York Chapter that features political prisoners, Oscar and Avelino González Claudio. The cultural program also featured the extremely talented poetry and hip hop of New York’s Welfare Poets.

In the evening, at Hostos College in the Bronx, Assemblyman José Rivera hosted his annual commemoration of the Puerto Rican flag in honor of Oscar López Rivera. Several cultural acts took place, including poetry from Chicago’s Jessie Fuentes and Janeida Rivera, hip-hop from Intikana, nueva trova by Papo Gelly, and the singing of Rafael Hernandez’s classic song, “Preciosa”, by an elementary school choir. A special message was also given by José López about the legacy of the late Lolita Lebrón.

On behalf of the Puerto Rican independence movement, as well as on behalf of my brother, Oscar López Rivera...
Crime Against Humanity