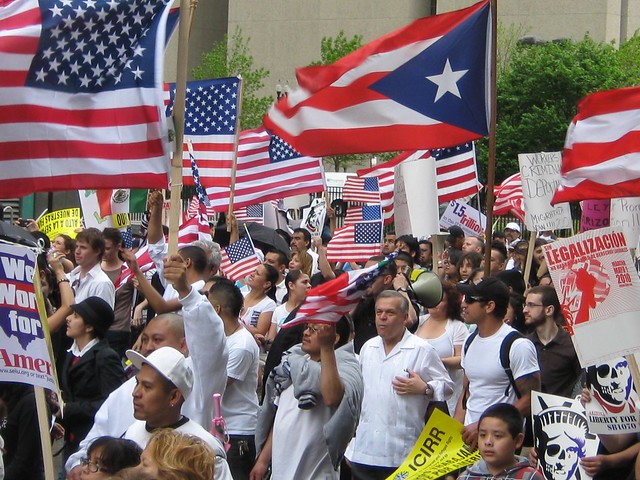 A Call to Reflection; A Call to Action: 1998- A Praxis on Colonialism

The Case of the Mexicans and Puerto Ricans –
Two People, One Destiny

1998 marks two infamous anniversaries for the two largest Latino groups in what is called the United States; for Mexicans, 150 years since the signing of the Treaty of Guadalupe Hidalgo, and for Puerto Ricans 100 years since the US invasion of their island.

On February 2, 1848, the Treaty of Guadalupe Hidalgo was signed; a humiliated and defeated Mexico accepted the Rio Grande as the border with Texas and ceded California, Nevada, New Mexico and parts of Colorado, Arizona, and Utah to the United States. Thus the jewel on the crown of the expansionist and imperial design known as Manifest Destiny was set in place. The country which, in 1776, had declared itself independent from colonial domination, had now become the world’s major colonizer. The Treaty of Guadalupe Hidalgo, like all treaties which the United States had entered into with Native Americans, was not to be enforced as far as the native inhabitants were concerned; as the great Puerto Rican Nationalist, Pedro Albizu Campos would say, “The United States wants the cage but not the bird.” This sentiment echoed the words of the Mexican diplomat Manuel Cresción Regón, who at the time of the signing of the Treaty, who said: “our race, our unfortunate people, will have to wander in search of hospitality in a strange land, only to be ejected later. Descendants of the Indians that we are, the North Americans hate us, their spokesperson deprecates us, even if they recognize the justice of our cause, they consider us unworthy to form with them one nation and one society, they clearly manifest that their future expansion begins with the territory that they took from us and pushing (sic) aside our citizens who inhabit the land.”

While the Treaty was lofty in its promises for the Mexican people in the occupied area, guaranteeing them “the enjoyment of all the rights of citizens of the United States,” the stark reality was another. Through all kinds of machinations — legal and illegal — Mexicans became citizens without any language prerequisite; in other words, Mexicans became citizens of the U.S. through an international treaty which superseded national law. As they were not required to have any knowledge of the English language, at that very moment the U.S. legally became a bilingual country: English and Spanish. If these new citizens were to enjoy the blessings of the Constitution, then the U.S. had to become an English and Spanish speaking country. Yet the promise was never kept; instead, through poll taxes and local laws requiring English literacy, Mexicans were totally disenfranchised from the body politic.

Thus began the Mexican sojourn into internal colonialism. Mexicans were now to be excluded from civil society. The usual pattern of U.S. federalism was initiated, i.e. the incorporation of the land by the settlers and the exclusion of the native inhabitants. It should be noted that no state has entered the Union since the adoption of the Constitution at the initiative of the native inhabitants of the territory. Instead, it has been the settlers who have petitioned for incorporation. A perfect example of this occurred in the cases of Hawaii and Alaska. By the time of incorporation, the native population had been reduced to an insignificant percentage.

Mexicans, on the other side of the U.S.-imposed border, never recognized it as a legal border. As a matter of fact, in 1922, a report to the U.S. Secretary of Labor reads: “The psychology of the average Mexican unskilled worker from Mexico is that when he enters in any manner into the United States that he is only paying a visit to an unknown portion of his own country. He is independent and does not consider he is an immigrant alien, but rather in what is termed the United States by right of birth and possession, the country of his forebearers, the territory acquired after the War of 1846 and the territory subsequently ceded in 1854 known as the Gadsen Purchase. To him, there is no real or imaginary line.”

It is clear that historically Mexicans have denied the existence of the border; they don’t see themselves as coming illegally into the U.S., for it is the U.S. that crossed the border illegally into Mexico. The recent anti-Mexican hysteria in this country, embodied in the passage of Proposition 187 in California, is an acknowledgment of this reality by sectors of the establishment. In other words, it is clear to the Pete Wilsons of this country that a “Mexican problem” exists. Their answer to the “Mexican Problem” is to deport them, to construct the “Tortilla Curtain.” These efforts are to no avail. There is a historical problem created 150 years ago which needs to be resolved, and no racist legislation, no tortilla curtain, no militarization of the so-called border, no attacks on bilingual education, no attempts to set back the clock on representation by the challenging of congressional districts, no moves to continue to seize Mexican natural wealth as evidenced by NAFTA at the expense of the indigenous and popular masses of Mexico, can stave off the final solution: a Mexican Solution to the Mexican National Question.

For the past 150 years, Mexicans on both sides of the so-called border have resisted and attempted to come up with a Mexican solution from the earliest resistance of Father José Martínez, Tiburicio Vázquez and Las Gorras Blancas, to efforts by LULAC, Mexican Newspapers, and the Pachucos, to the Chicano/Mexicano movements of the past decades. All these efforts have cost the Mexican people dearly. Despite the imprisonment, lynchings, exile, and danger to their lives, this resistance has been kept alive through the dangerous memories transmitted from generation to generation.

On July 25, 1898, Nelson Miles invaded the island of Puerto Rico through the southern port of Guánica. Ever since then, Puerto Rico has been designated by the U.S. Supreme Court as an area “belonging to, but not part of, the U.S.” In other words, Puerto Rico has been a possession of the United States, literally a non-incorporated territory. As a result of the adoption of the Jones Act, Puerto Ricans were made U.S. citizens in 1917, and, like Mexicans in 1848, were not required to possess prior knowledge of English as a prerequisite for U.S. citizenship. For Puerto Ricans on the island, it has meant nothing more than they had to pay the highest tax exacted from any human being — a blood tax. Puerto Ricans now had the “right” to fight in U.S. wars but had no right to representation. Remember the slogan that inspired and fueled the revolution of 1776: taxation without representation is tyranny.

For 100 years, Puerto Ricans have never been consulted as to their political status. Even though the structure of the island’s government has undergone a series of reform efforts from the Foraker Act of 1900, to the Jones Act of 1917, to Law 600 in 1950, and finally to the creation of the ELA (Free Associated State) in 1952, the question of the sovereignty of Puerto Rico is in the hands of the U.S. Congress. According to the Treaty of Paris of December 10, 1898, the U.S. Congress is the only entity which can decide the political fate of Puerto Rico.
While every attempt has been made to de-nationalize and de- “Puerto Ricanize” Puerto Rico, Puerto Ricans have resisted. Puerto Rican resistance has taken many forms, from direct political action to cultural resistance and civil disobedience. For their resistance, like Mexicans, Puerto Ricans have had to pay a very heavy price, including massacres, bombings, imprisonment and assassination of their people. This repression is exemplified by the fact that today in U.S. prisons there are 15 Puerto Rican men and women serving disproportionate sentences for their activities on behalf of Puerto Rico’s right to be a free and independent nation, to actualize themselves as a free people.

In this year that marks 100 years of colonialism for Puerto Ricans and 150 years for Mexicans, we are calling upon all our Latino brothers and sisters, as well as all freedom-loving peoples, to join us in a praxis on colonialism, to reflect upon these long years of mental, physical, cultural and psychological imposition of colonialism, as well as the cultures of resistance which have continually fought against it.

In that context, Mexicans and Puerto Ricans have made a call to all Latino cultural workers (poets, musicians, journalists, graphic artists, muralists, dramatists), teachers or lawyers, engineers or doctors, children in the streets, women at work, or youth in schools. Paint murals, write poetry, write and direct plays, create videos; hold teach-ins. Whatever you do, organize in the name of anti-colonial resistance, keeping in mind these questions: What have these many years of colonialism meant to you? What does it mean for our future? How are issues of the attacks on immigrants (i.e. Proposition 187), gentrification, criminalization of youth, criminal injustice, the National Question, political prisoners, police brutality interrelated with this reality?

It is within the spirit of protesting these invasions and celebrating our resistance that we are supporting three major events this year:

* Jericho 98: a mobilization to Washington DC on March 27, 1998, to demand the release of all Political Prisoners in US prisons.

* A Day Without Latinos: October 12, 1998: 150 Years and the Treaty of Guadalupe Hidalgo: A People Without Borders; and, A National Day of Reflection and Action in all US cities with sizable Latino populations.

It is also within this spirit that we in the Puerto Rican independence — presently under vicious attack by an FBI-led COINTELPRO operation, and facing the imminent adoption of the pro-statehood Young Bill by the U.S. Congress — are pleased to join in the effort of publishing this new edition of Can’t Jail the Spirit.

(Who killed Pinto Gandía?) A novel by writer and poet Carlos Quiles, based on the disappearance of the Puerto Rican...
Latino Agenda