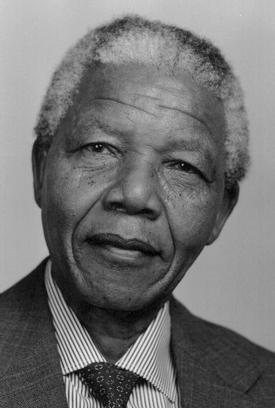 13th Letter by Oscar Lopez Rivera: “The Presence of Mandela”

There are events that, as soon as they occur, engrave themselves in our minds with even the most insignificant details and surrounding circumstances, and compose an image of desolation and pain that will never be erased.

I know now that the moment that they told me that Nelson Mandela had died, it will never be erased from my mind. I was touching up a portrait that I am doing of the filmmaker Jacobo Morales, and the brush remained hovering in the air. Even so, it did not take me by surprise. It was obvious that, because of his age and his illness, the end was approaching. That same day, in the cell, I was listening to the news. I heard various hypocrites lamenting that we had lost such an esteemed man. Some of the people that are lamenting today are the same ones who never lifted a finger in defense of the African National Congress, the party that promoted the abolition of apartheid. On the contrary, they liked to call Mandela a terrorist and never did anything to get him out of jail.

The memories flooded over me of situations that I lived through during the time i became conscious of the struggle that Mandela waged.

In 1970, a young seminarian who was about to become a priest began working in the same place I did. A few days later, we started a dialogue about the repression and violence in South Africa. He asked me if I was aware of what was happening there and I confessed that in reality I didn’t know much. I have always been wary of those people who talk endlessly about the problems that are suffered far away, but are incapable of looking at the problems in their own country.

My principal preoccupations were the terrible hardships suffered by the Puerto Rican diaspora, and also the colonial status of Puerto Rico.

Although I listened attentively to the seminarian, I explained to him that I could not get too worked up about the struggle against apartheid, from the United States, because I had my hands full with the vicissitudes of my compatriots. Nevertheless, little by little I went about soaking up the news about events in South Africa.

During those years, the South African activist, educator, and poet Dennis Brutus taught at Northwestern University and I went to hear him. He gave a memorable speech about apartheid, and from that point on, every time that I had some free time, I went to the activities that they had organized to support the African National Congress and Mandela, its principal figure.

Toward the end of the 80s, the tension in South Africa had reached its peak. By then, I was in prison and read everything I could get my hands on regarding Mandela’s trial. Since he was accused and convicted of the same crimes that they attributed to me, I wanted to see how his attorneys had handled his case and how Mandela had dealt with prison. I was deeply moved by the words he had pronounced before the court and his posture before those who tried to crush him.

From the beginning of those years, I have drawn strength and hope from Mandela’s words — from his writings and his staunch position in favor of the oppressed. I have read much about his life and about Winnie, Steven Biko, and so many others who stood up against that government of racial segregation.

Every revolutionary is different. The way that Mandela grew up, his political formation, and even his struggle is different from mine and from every other individual in the world. What makes us all similar is our love of freedom and justice. It is definitely that love that lets us advance and keeps our hearts and minds from being poisoned by hatred or broken by fear.

You, Karina, will always remember the moment when Mandela said good-bye, and what you did and what you thought in the moment they gave you the news. Many years from now you will be able to tell your children and grandchildren. I hope that you will do so with pride.

In resistance and struggle, your grandfather,