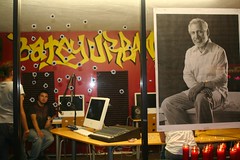 On September 23, 2007, the National Boricua Human Rights Network and the Batey Urbano celebrated the 139th anniversary of El Grito de Lares, as well as commemorated the 2nd anniversary of the murder of Filiberto Ojeda Rios.

Two years ago at Lares, Puerto Rico, while Puerto Ricans celebrated their declaration as a nation against Spanish colonialism, the FBI descended onto the home of Filiberto Ojeda Rios in Hormigueros, Puerto Rico and assassinated him. At 4:30 am, in a military-style operation, over 200 agents surrounded the home of Ojeda Rios, who was 72 years old. The agents, heavily armed, fired over 100 shots into his home. Filiberto was shot once under his clavicle and was left to bleed to death for more than 20 hours. During the autopsy, it was determined that his wound was not fatal and he would have lived if he had received immediate medical attention.

The other important aspect of this event was that of Grito de Lares, or Lares uprising, which occurred on September 23, 1868 in the town of Lares. The uprising was planned by a group led by Dr. Ramón Emeterio Betances and Segundo Ruiz Belvis, founders of the Comité Revolucionario de Puerto Rico (Revolutionary Committee of Puerto Rico) from their exile in the Dominican Republic. The Grito de Lares was a response by the pro-independence movement to the exploitation of Puerto Ricans by Spain and its colonial system. Participants in the insurrection represented all sectors of Puerto Rican society, including landowners, merchants, professionals, peasants, and slaves.

The night included invited guests Julio Chávez , Mayor of the city of Torres, State of Lara in Venezuela, who spoke on the act of solidarity the Venezuelan government committed by placing a bust of Filiberto on La Avenida de los Ilustres (Avenue of the Illustrious), Jan Susler of the People’s Law Office, who gave the latest legal update of the investigation into the assassination of Filiberto, and the PRCC Executive Director José E. López, who wove the evenings presentations together by discussing the historical context of el Grito de Lares and why it is relevant today. The event progressed with a silent procession to the Batey. Along the way the group stopped at La Casita to raise the Puerto Rican flag and sang La Borinquena. Once arriving at the Batey, poetry was performed by the Batey poets Michael Reyes, Janeida Rivera and Judy Díaz and by a newcomer to our community, Yomaira Lugo Vélez. The event ended with guests participating in an art installation by pasting cut-outs of 100 bullet shots on the window of the Batey to represent the 100 bullets that were shot into the home of Filiberto Ojeda Rios and lit twenty red candles which represented the 20 hours he was left to bleed to death by the FBI. Over 100 people participated in the event, including over students from Dr. Pedro Albizu Campos High School and the Family Learning Center and many community members. The National Boricua Human Rights Network and the Batey Urbano thank everyone that came out to remember the life of Filiberto and the Grito de Lares!

The below blurb was written for the forthcoming book, tentatively titled, Finding the Struggle: Radical Movements in the Neoliberal United States, 1970-2001, to be...
Read more
Human Rights