An Initiative of the National Boricua Human Rights Network (NBHRN) 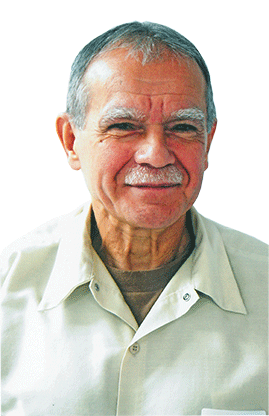 For more than 33 years, Oscar has been in the custody of the United States government, for his commitment to the independence of Puerto Rico. A community organizer, decorated Vietnam veteran, father and grandfather, he is serving a 70-year sentence for seditious conspiracy. Oscar was not convicted of harming or killing anyone. His co-defendants were released in 1999 by a presidential executive clemency and are today productive, law-abiding members of civil society.

A community organizer, decorated Vietnam veteran, father and grandfather, he is serving a 70-year sentence for seditious conspiracy, the exact charge levied against South African freedom fighter Nelson Mandela. In López Rivera’s case, he participated in the struggle to end the U.S. colonization of Puerto Rico, which began in 1898 at the conclusion of the Spanish-American War. Though he was not convicted of harming or killing anyone, he has served more time in prison than many people convicted of violent offenses. Moreover, his co-defendants—released in 1999 by a presidential executive clemency—are productive, law-abiding members of civil society.

Now 71 years old, he has survived the worst prison conditions this country has to offer, including over 12 years of Guantánamo-like isolation and sensory deprivation, only to emerge with his political integrity—and his sense of humor—fully intact. While his survival has everything to do with his unwavering commitment, it also has to do with the support of the Puerto Rican people and people who support human rights throughout the world, who have asked President Obama to exercise his constitutional power of pardon, commute Oscar’s disproportionate 70-year sentence, and grant his immediate release.

Scholars—academics, writers and intellectuals—have played and will continue to play an important role in this campaign for his release, as these examples illustrate:

• Professor Eduardo Lalo, University of Puerto Rico, spoke of Oscar when the president of Venezuela conferred on him the Rómulo Gallegos Prize for Literature for his novel Simone, the first Puerto Rican to earn this internationally prestigious recognition.

• The Puerto Rico chapter of the International PEN Club, comprised of writers and academics, has articulated publicly its support for Oscar’s freedom.

With imagination and creativity, scholars can teach and expose students; organize fellow faculty, unions, academic senates, university officials to write letters and pass resolutions supporting Oscar’s release; and develop other ways to speak out in support of his release. Join the campaign!

Ways to Support
1) Submit letter of support on university/departmental stationery. (Download template here).
2) Reach out to other professors of conscience to join the Scholars for Oscar López Rivera initiative.
3) Circulate NBHRN’s letter of support to your students, colleagues, families, and allies. (Click here to download)
4) Organize educational teach-ins, forums, and activities on your campus. (Click here for lesson plan)
5. Make financial contribution to campaign (Click here for details)
6. Use your creativity and imagination to develop other ways to articulate support for his release.