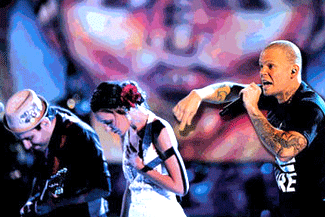 Under the pouring rain and the sounds of Venezuela’s youth orchestra, the lyrics of Calle 13’s Grammy award winning song “Latinoamerica” were chanted by thousands present for the closing ceremony of the first summit of the Community of Latin American and Caribbean States (CELAC). Held in Caracas, Venezuela on December 2 and 3, the CELAC represents the formation of a new political and economic regional bloc that unites thirty-three countries from across Latin America and the Caribbean, but which does not include the United States and Canada. This song, one of Calle 13’s most recent, has become the international anthem throughout the Spanish-speaking Americas. Not only does it poetically describe experiences of historical injustice, poverty and the ruthless operations carried in Latin America by the United States and its allies, but also it has reinserted Puerto Rico and its colonial situation on the Latin American and international stage.
Prior to CELAC summit, Bolivian President Evo Morales made an acknowledgement of Calle 13, stating that “their songs, their interpretations, represent the people of, not only Bolivia, but of Latin America as well.” Historically, Calle 13 has distinguished itself from other performers by giving voice to the voiceless, just as they did just on the last day of the summit. Among the 33 nations invited to CELAC, Puerto Rico’s absence was the most felt. The absence of Puerto Rico is due to the fact that Puerto Rico is a colonial possession of the United States. Since the signing of the “Treaty of Paris” on December 10, 1898, which concluded the so-called Spanish American War, the fate of Puerto Rico and its people have been determined by the U.S. Congress.