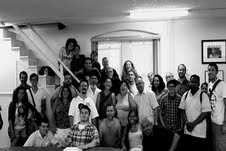 On August 6, community activists and supporters of the campaign to release Puerto Rican political prisoner Oscar López Rivera, gathered at the Iglesia Cristo y San Ambrosio in Philadelphia for the National Boricua Human Rights Network National Meeting. Attendees journeyed from various East Coast and Midwest cities with the goal of developing an action plan to advance efforts towards Oscar’s freedom.

The meeting, facilitated by NBHRN Coordinator Alejandro Luis Molina and Philadelphia Coordinator Inez Ramos, kicked off with a discussion around the strengths and weaknesses of the current campaign for Oscar’s release. Attorney Jan Susler, who has represented Oscar and former Puerto Rican political prisoners for many years, followed with a presentation on the parole hearing held earlier this year during which Oscar was denied release. The legal strategy is to put pressure on President Obama to commute Oscar’s sentence, explained Susler. Commutation is an executive power the president has to release a prisoner considering his/her behavior and lengthy prison sentence. Political leaders from the United States and Puerto Rico have already begun sending letters to the president calling for Oscar’s release.

Collective brainstorming around ways to support Oscar’s release and raise awareness around his case led to many innovative ideas from the group including painting murals of Oscar in various cities, taking Oscar’s campaign to colleges and universities, creating curriculum that can be used by teachers to educate youth on his case, as well as producing a full-length documentary on Oscar, among other ideas.

As the meeting came to a close a birthday cake was cut for former Puerto Rican political prisoner Luis Rosa Perez, who thanked everyone for their support and solidarity.  A community tour of Philadelphia’s Puerto Rican neighborhood concluded a day filled with hope and determination to see Oscar López Rivera out of prison and reunited with an international community that wants him home now!