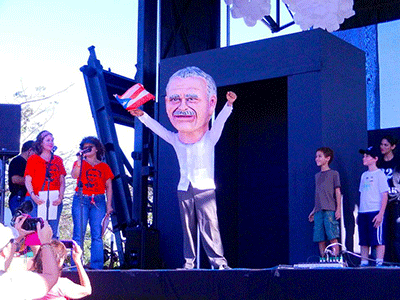 The Hands on the Prison Glass: Letters of Oscar López

The series “Manos en la Cristal” is published online by the Puerto Rican newspaper El Nuevo Dia (endi.com) every Saturday in Spanish and is the correspondence by Oscar Lopez Rivera to his granddaughter, Karina.

The title, “Hands on the Prison Glass” comes from an essay originally written by Karina and her mother, Clarisa, for the catalogue produced for “Not Enough Space”, the traveling art exhibition of Carlos Alberto Torres and Oscar’s art, and has evolved into a moving metaphor for reaching beyond the prison’s dehumanizing environment and communicating with his daughter and granddaughter through the prison walls. Download/read the story Manos de cristal-web.

The links to the letters will become live as we post new translations.
The letters in English:

1st Letter of Oscar Lopez Rivera to his granddaughter Karina: “The Hands on the Glass”
Published September 7, 2013

2nd Letter of Oscar López: “Where the Sea Breathes”
This is the second letter of López to his granddaughter Karina
Published September 14, 2013

3rd letter: Letter of Oscar López: “The reason behind all struggle”
Published September 21, 2013

6th Letter of Oscar Lopez Rivera The Hands on the [Prison] Window: To be who we are
Published October 12, 2013