Philadelphia- The National Boricua Human Rights Network sponsored a successful week of events with former Puerto Rican political prisoner Alicia Rodríguez, in honor of Women’s History Month. Over the course of one week, it successfully reached out to several thousands of people in the Philadelphia area with our campaign for the release of Oscar López Rivera, the last remaining Puerto Rican political prisoner. Ms. Rodríguez was a guest speaker at Temple University, University of Pennsylvania, Lutheran Theological Seminary at Philadelphia, local radio program El Tapon 1680 AM, Youth United for Change, and Christ and Saint Ambrose Church. Several of these speaking engagements were supported by the music of singer, songwriter, and musical director, Papo “Forajido” Gely.  These events were covered by local newspapers, Al Dia and El Impacto.

The Network continues to organizing with an upcoming mural unveiling on Saturday, April 30, 2011, with renowned artist and former political prisoner, Elizam Escobar, and editor, author, and renowned poet, Joseramon “Che” Melendes.  The Philadelphia chapter is also hosting a series of movie screenings in the spring/summer 2011 season which highlight the Puerto Rican social-historical experience of oppression, repression, and resistance. 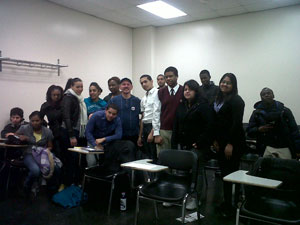 During the Week of March 18-25, the East coast was honored with the presence and participation of former political prisoner Ricardo Jimenez on a speaking tour. He spoke at many events from academia to Puerto Rican community venues in New York to several charlas at supporters homes.  At three of the workshops held at the LEFT FORUM at Pace University of New York, Ricardo spoke as a panelist at three workshops “US Wars: Political Prisoners of all the movements”, “Free Puerto Rican Political Prisoners” and “Puerto Rico Can’t Wait to be Free”.  All workshops were well attended and the public eagerly signed petitions urging Political Prisoner Oscar Lopez Rivera‘s release.   He was the first speaker warmly welcomed to address a room filled to capacity about his imprisonment, subsequent release and role in the present campaign for the immediate release of political prisoner Oscar Lopez Rivera.
At the same time the Network- New York Chapter collected hundreds more petitions with a literature table in Pace University’s gym for two days where thousands visited the area.

During the week, Ricardo impacted students and community members with his message of national self-determination and freedom for political prisoners. He spoke at the college classes filled with students of diverse cultures and nationalities at the Eugenio Maria de Hostos Community College invited by Professor Ana López.  He was a speaker at El Maestro, community organization where “La Masacre de Ponce” was commemorated.  He was joined by National Hero Antonio Cruz Colon, age 83, another independence freedom fighter of the Jayuya Revolt of the 1950’s.

Ricardo was interviewed by WBAI Pacifica Radio, Voz  Latina radio/TV program and City College of the City University of New York radio stations all reaching a tri-state area (NYC, Connecticut and New Jersey).  He was interviewed by a young filmmaker and producer who will produce a small documentary of Ricardo.

Besides New York and tri-state radio broadcasts, Ricardo also was a keynote speaker at Brown University, where he presented a thorough historical view of the struggle for Puerto Rico independence and the campaign for the freedom of political prisoners.