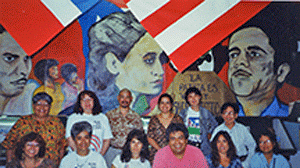 The National Boricua Human Rights Network and the Puerto Rican Cultural Center extend their deepest condolences on the passing of Dr. Richard “Kekuni” Blaisdell, exemplary educator, historian and visionary activist in the struggle for Hawaiian Independence.

I was privileged to coordinate Ka Ho’okolokolonui K?naka Maoli – Peoples’ International Tribunal Hawai’i 1993 of which Dr. Richard “Kekuni” Blaisdell was the convenor. He later visited Chicago with a contingent of Kanaka Maoli (indigenous Hawaians), which were the Honorary Marshals in the 1994 Peoples Parade. Over the course of twelve days in August 1993, the United States and the state of Hawai’i were put on trial for crimes against the original people of Hawai’i, the K?naka Maoli, by the People’s International Tribunal Hawai’i. This panel of international judges was convened to hear charges of genocide, ethnocide, the taking of the Hawaiian sovereign government and the destruction of its environment.

Kekuni was deeply committed to the struggle of the Puerto Rican for their independence and in support of freedom for Puerto Rican political prisoners.

Kekuni was an unforgettable man who strove to meet his historical responsibility at an extraordinary moment in the struggle for Hawaiian independence- the centennial commemoration of the overthrow of Queen Liliuokalani and the Hawaiian Monarchy in 1993.. We first met at the 1992 International Tribunal of Indigenous Peoples and Oppressed Nations in San Francisco entitled “USA on Trial”, as part of the resistance against the quincentennial celebrations of the Columbian Expedition. During the Tribunal, the representatives of the Hawaiian Sovereignty Movement testified before a panel of international jurists on their struggles- cultural environmental and political and also heard about other freedom struggles in the US, in particular the Puerto Rican. We developed a long and fruitful relationship based on solidarity, helping the Hawaiian contingent at the 1993 UN Human Rights Conference in Vienna, Austria, and then helping to coordinate the Peoples International Tribunal. Along the way, we began to discuss the possibility of uniting representatives of the island/nations invaded by the US in 1898. Several meetings of the “1998 Working Group” took place in Chicago and Hawaii, and a possible book was planned, but events, capacity and priorities changed and so did our collective plans.