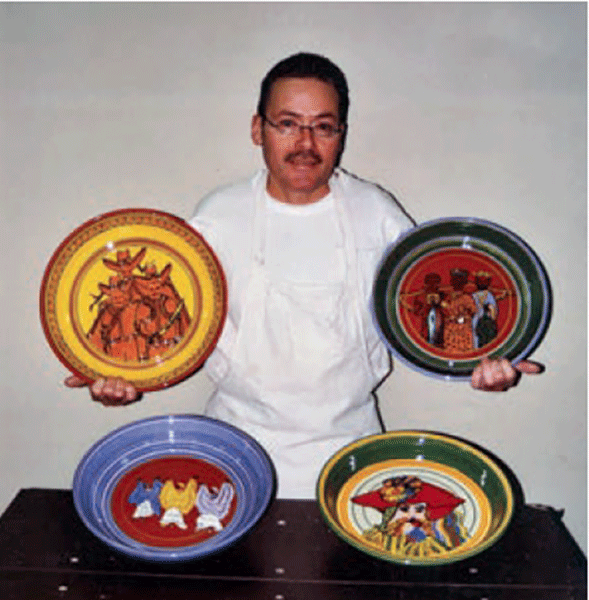 “When I paint I feel alive; and when I finish a painting it’s as if I’ve reached a mountain top. When I give it to who it was intended for, it’s like giving flowers to one’s mother. When I began to work with ceramics, it was love at first sight.” Carlos Alberto Torres January 2004

Carlos Alberto Torres was born in Puerto Rico on September 19th, 1952. His family relocated to New York and later to Chicago. He studied at Southern Illinois University and at the University of Illinois in Chicago. During that time he became actively involved in community struggles for better education, improved housing and jobs. Carlos Alberto also supported the movement for Puerto Rican independence and participated in the campaign to free the Puerto Rican Nationalist prisoners. In 1976 he was accused of being a member of the FALN (Armed Forces for National Liberation) which caused him to go into clandestinity. In 1980, Carlos Alberto was arrested and charged with seditious conspiracy and sentenced to 78 years in state and federal prisons. While in jail he completed a bachelor’s degree and became interested in the visual arts. In 1999, inexplicably, Carlos Alberto did not receive President Clinton’s offer of sentence commutation, which was offered to 11 other Puerto Rican political prisoners. Throughout the years, Carlos Alberto has learned to express himself through writing, painting and ceramics. He is a father and grandfather and will complete the maximum of his sentence in the year 2024. In his 25 years of imprisonment, Carlos Alberto has confirmed the significance of art as a process for the liberation of the human spirit when confronted with the most adverse situations. All of this is evidenced in his art production, which reveals his profound human sensibility. The creative work of Carlos Alberto is a proposal of love and solidarity for his community and country. The color, happiness and optimism reflected in his creative work are undeniable proof of Carlos Alberto’s freedom of mind and spirit, despite his physical incarceration.

During the early years of my incarceration, I recognized that challenging myself with new goals was an essential component of living through this experience. Separated from my family and friends, from familiar surroundings, this new social reality would test every part of my makeup. As a political prisoner and person of conscience, one of the challenges I would face would be to maintain a balance between the perspective that corresponds to the demands of living in this unnatural setting and an outlook that would preserve and best reflect the ideas, goals and hopes that I aspire to as a Puerto Rican patriot and political being. Although it is an imperfect process, with time I learned that the best approach for me was to allow new interests and perspectives to evolve naturally and seek out and cultivate skills that would permit creative self-expression. I would transform my physical captivity into a time for learning, productive accomplishments, and moral victory. The reality of incarceration most often includes the transfer from one prison to another. No two prisons are identical. The pace and conditions of life, the availability of resources and services, vary from place to place. On arriving here [FCI Oxford] I discovered that there was a well-organized art program, and that under the rubric “hobby/craft,” facilities existed for painting, pottery/ ceramics and leatherwork. The program was supervised by an elderly artist couple. However, because the program was mostly treated as a recreational activity, teaching by either of the couple was very limited. In most cases, another prisoner in the program would help a beginner get started. One could either sink or swim based on one’s personal ingenuity and creative will. My first choice was painting. It does not require much experience to recognize the narrative potential of painting. It can be storytelling by different means. The symbolic potency of visual images is no less powerful than the spoken word or written word. These essential characteristics I found compelling. For several years I painted with acrylic paints. Acrylics dry very fast and generally provide a wide range of bright colors. As a novice, this served me well. I wanted to paint fast and often, choosing themes from Puerto Rican life and history. As I moved towards portraits and more refined portrayals of human form, using acrylic paints remained a great challenge. Eventually, I moved into oil paints, and although this was like starting all over again, its unique qualities were very appealing. There is a physicality to working with clay that I liked very much and that was absent in painting. When I began to work in clay, as with painting, the process was mostly autodidactic. A spirit of cooperation is generally an alien notion in prison; the nature of the experience leads many towards self-centeredness, suspicion, and drastic individualism. Although the art program was no exception, this would change somewhat with time. In order to get started, I viewed several pottery videos, read books on the subject, and subscribed to a ceramics magazine. When possible, I was assisted by another prisoner and local artist who took over the supervision of the program when the elderly couple retired. When he in turn left, the pottery program’s teaching responsibility fell mostly to another prisoner. I initially treated pottery decoration as if it was an extension of painting, as though the fired clay was simply another surface to paint on. I abandoned this mechanistic approach as I developed and acquired experience. Nevertheless, my experience with paints left a mark and continues to influence my approach to a piece. My strong interest in natural history, archeology, and the history and life of Puerto Rico also influence the subjects I choose when developing a piece. I employ recognizable symbols for some of the pieces and in particular when making the vejigante mask. No man is an island; I am no exception. I would like to thank my family and everyone who has contributed so much to organizing this art exhibition. Without their effort, it would have remained only an idea. Thank you.