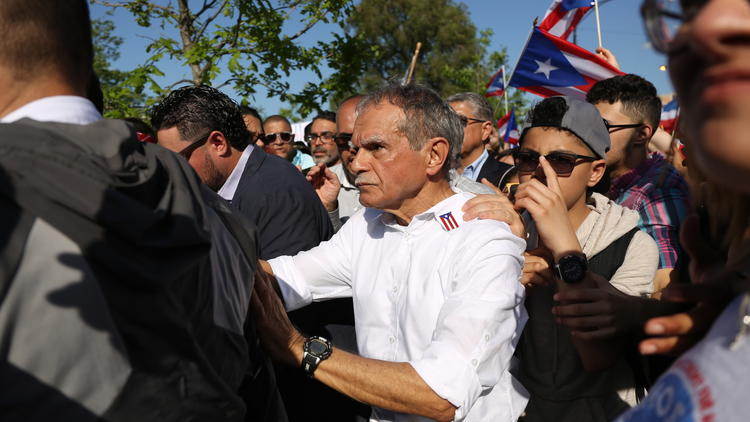 For a moment late Thursday afternoon, it seemed like everyone in Humboldt Park had turned out to welcome home Puerto Rican nationalist Oscar Lopez Rivera, newly free after more than three decades in prison.

Many in the crowd consider Lopez a hero of the Puerto Rican independence movement and had waited decades for this moment. Loud cheers broke out when Lopez walked through the crowd to the casita’s front porch, flanked by politicians and fellow activists.

“After 35 years and months as a prisoner, I want you to know I never, ever lost hope that I’d be here with you on Division Street in Humboldt Park,” Lopez, 74, told the gathering, speaking in Spanish.

Lopez was considered a top leader of the Armed Forces of National Liberation, or FALN, an ultranationalist Puerto Rican group that claimed responsibility for more than 100 bombings at government buildings, department stores, banks and restaurants in New York, Chicago, Washington and Puerto Rico during the 1970s and early ’80s.

Among those greeting Lopez was Carlos Alberto Torres, a fellow FALN member who himself spent decades in prison. He called Lopez’s return to Chicago “the culmination of a great odyssey.”

“This is our brother, our friend, family,” Torres said, a cigar in his hand.

Lopez had become a free man just a day before, gaining early release after former President Barack Obama commuted his sentence in January. Since then he has been on house arrest in Puerto Rico.

Lopez, a Vietnam War veteran who moved from Puerto Rico to Chicago as a child, wasn’t convicted of having a role in the FALN bombings, which killed six people and injured dozens, but those who lost loved ones hold him responsible.

“This guy was convicted of leading the FALN that murdered people,” Joseph Connor, whose father, Frank, was among four people killed in a 1975 bombing of the Fraunces Tavern in New York, told the Associated Press.

Federal authorities charged Lopez in 1977 in connection with 16 Chicago area bombings. He remained a fugitive until he was captured in 1981 after police in north suburban Glenview stopped him for a routine traffic violation.

He later faced an additional 15 years in jail after he was convicted of conspiring to escape from prison in Leavenworth, Kan.

In 1999, President Bill Clinton offered Lopez clemency but he rejected the offer because it excluded two associates who have since been released. In 2011, the U.S. Parole Commission denied his request for an early release.

“He has his champions and his critics, but this much is true: He served a lifetime in prison, including 12 years in solitary confinement. Don Oscar will spend his twilight years on the island for which he sought independence, and this feels fitting,” Miranda told the AP in an email, referring to Lopez with the Spanish honorific of “don.”

Lopez returned on Thursday to a neighborhood he helped shape, but one that scarcely resembles the place where he grew up.

Back then, the area was littered with rundown buildings and plagued by unemployment. There were few thriving Puerto Rican businesses, and the education system wasn’t serving the neighborhood well.

“Literally the community was burning around us,” Gutierrez said.

Today, there are a number of Puerto Rican political leaders in the city — Gutierrez among them — and two huge steel Puerto Rican flags welcome visitors on either end of a stretch of Division Street known as Paseo Boricua — Puerto Rican passway.

Before his arrest, Lopez helped set the change in motion, Gutierrez said.

“Many of the things we celebrate today in our neighborhood, institutionally, began with him,” Gutierrez said, citing Dr. Pedro Albizu Campos Puerto Rican High School and the Puerto Rican Cultural Center, both of which Lopez helped start.

“He fought to make the educational system more responsive,” Gutierrez said. “He saw young Puerto Ricans arrive from the island to be put in special education, put in a corner to play checkers … he fought to change that.”

Danette Sokacich, principal at Campos high school, said Lopez’s example is one she touts to her students, dozens of whom turned out for his return.

“Oscar has a relentless spirit we try to invoke in our students,” Sokacich said.

Maylene Rivera, 17, said that despite his long absence Lopez is “part of the community” and said she was proud to be at his homecoming.

“If it wasn’t for this school, I would’ve dropped out,” Rivera said.

Lopez’s younger brother, Jose Lopez, is executive director of the cultural center. He said the neighborhood was “literally a slum and a ghetto where people lived in an extremely marginalized environment” when Oscar left for the Vietnam war.

Upon his return in 1967, Lopez worked as a community organizer, his brother said. Lopez helped establish the Latino Cultural Center at the University of Illinois at Chicago and Latin American Recruitment Education Service, his brother said.

Lopez also organized against employment discrimination and pushed for Latinos to have better job opportunities. Lopez was active in “just about every facet” of “the fight for social, economic, (and) political justice,” Gutierrez said, noting he met Lopez while teaching at what is now Campos high school.

“Self-reliance was an important principle he taught many of us. We created that high school. It was our institution. It responded to our needs,” Gutierrez said. “We literally financed it going door to door.”

After an initial reception at the casita, Lopez led the crowd in a march down Division to Mozart Street, where Ald. Roberto Maldonado, 26th, revealed an honorary street named in Lopez’s honor. Maldonado praised Lopez as being “true to his beliefs, true to his principles and true to his Puerto Rican roots.”

“He passionately fought for the rights of Latino and black Chicagoans,” Maldonado said.

Not everyone on hand was forgiving of Lopez’s criminal past. Mark Heller, who said he lives in the community, stood near the front of the crowd at Lopez’s street-naming holding a sign reading: “Terrorist OLR.”

Some men attempted to take it from him but, when they weren’t successful, others maneuvered their Puerto Rican flags in front of his banner, largely obscuring it from view. After the ceremony, Heller criticized Lopez.

But the mood otherwise was best represented by the crowd, which after Maldonado’s remarks chanted, “Oscar’s free!”